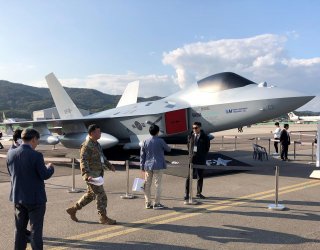 The KF-X fighter is a joint South Korean-Indonesian project that was originally conceptualized in the early 2000s. The project stalled for some time, as it became obvious that the fighter would require a great deal of research and development funding which Seoul lacked. In the 2010s, the project was rebooted thanks to Indonesia being brought into the project in return for footing part of the bill, about 20%, in return for 50 of the advanced stealth fighters.

The KF-X is South Korea’s second indigenously built and designed fighter, after the T-50 supersonic trainer aircraft that can also serve in a light combat role. Though the KF-X resembles the American F-35 stealth fighter in some ways, especially the nose which also has a prominent chine, the smaller Korean jet will likely be considerably less stealthy.

It will, however, be stealthier than other non-stealth fighters, and Seoul hopes that it will be more capable than their F-16s. KAI stated that the KF-X fighter “is one of the most important national project [sic] to replace current air force fighters and to introduce the next generation fighter that can satisfy the future operation concept of force battlefield.”

Seoul would perhaps like to replicate the export success they’ve enjoyed with their T-50 trainer jet which has been distributed to several friendly countries in Asia, and to Iraq. How successful this particular airframe will be on the arms market remains questionable however, due in part to the technical assistance that Seoul received from Lockheed Martin.

The Bethesda, Maryland based company provided KAI with several technologies from Lockheed’s F-35 program, which may result in some export restrictions.

KAI expects the KF-X fighter to be completed by “the first half year of 2021 and the first flight test is scheduled to be done in 2022.” As soon as 2026, the program could reach its end if all goes according to schedule, though the ongoing coronavirus pandemic may upset the mid-2020 timetable. In July, the defense group Janes reported that Indonesian engineers, part of the KF-X project, had left South Korea for four months when the Coronavirus hit South Korea particularly hard.

Regardless of when the KF-X is finally unveiled, the program will make South Korea just the second Asian country to bring an indigenous stealth fighter in service, behind China. Though one thing both airframes have in common—they owe some measure of their development to the United State’s F-35 program.