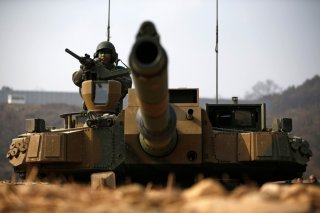 The Republic of Korea Army (ROKA) is slated to receive a new tranche of main battle tanks from South Korea’s manufacturing giant, Hyundai Rotem. The tanks, the latest of the formidable South Korean K2s, are among the world’s best.

The ROKA’s Black Panther is in some ways like many other country’s main battle tanks: it sports a 120mm main gun and has a formidable armor package that includes an active protection system. Where the K2 is unlike many of its contemporaries, however, is the ammunition it fires.

In addition to standard high-explosive munitions and hardened kinetic penetrators, the K2 can also bring a powerful top-attack munition to bear on the battlefield: the KSTAM-II. Rather than aiming at a tank’s front armored glacis, generally the most-protected part of a tank, KSTAM-II rounds are fired upwards, in more of an artillery-like trajectory at long ranges of about 8 kilometers or around 5 miles.

The KSTAM-II benefits from moveable fins that direct it towards enemy armored formations. Once above a target, the K2 releases a parachute to retard its forward motion, and fires an explosively-formed penetrator down and towards a tank’s thinner turret top armor to devastating effect.

At around 55 tons, the three-man K2 is on the lower end of the scale compared to some heavier American tanks. This low curb weight is a boon to mobility and makes the tank rather nimble.

Another feature that sets the K2 Black Panthers apart from the rest of the competition is their suspension, which is tailor-made to the Korean peninsula’s terrain. A number of small mountains dot the peninsula, including the Paektu range, which runs through both North and South Korea like bony vertebra.

The K2’s suspension makes the Black Panther an excellent mountain warfare platform, as it can be adjusted to allow the tank to “lean” forward or backward, giving the tank’s main gun the necessary elevation to strike targets in close but high up in mountain positions, or alternatively down and below the tank.

These tanks will sport a German-made transmission, though they’ll have a locally-sourced engine unlike the early K2s, which were forced to source engines from Germany as well, due to a dearth of acceptable locally-produced engines.

Although the K2 is optimized for a war on the Korean Peninsula, the little tank has had some success with several other countries. In early 2020, Poland inked a deal with Seoul for about 800 K2s that would replace the country’s motley collection of Soviet-era T-72s, indigenous PT-91s, and German Leopard II tanks.

Turkey leaned on the K2 program for their own tank design as well and planned on incorporating features of the Black Panther’s acrobatic suspension system and chassis into their own indigenous tank design.

The K2’s advanced suspension, combined with its unique top attack munition and high weight-to-power ratio make the Black Panther one of the most advanced tanks in the world—it would likely make mincemeat of whatever the North tossed at it.