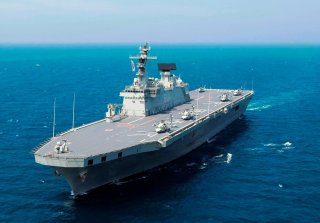 South Korea is moving ahead with plans to procure several aircraft carriers over the coming decade, a move spurred by the North Korean missile threat as well as the mounting naval ambitions of China and Japan.

South Korean news outlet Chosun Ilbo reported earlier this week that the Republic of Korea Navy (ROKN) is considering converting a large transport ship that is currently under construction into a light aircraft carrier. This news comes on the heels of the Navy’s 2019 defense report, “Navy Vision 2045,” outlining a roadmap for the procurement of the ROKN’s first aircraft carrier in the early 2030s. This upcoming carrier, dubbed  “LPX II,” is being developed by Hyundai Heavy Industries as a larger, thirty-thousand-ton-displacement iteration of the Dokdo amphibious assault ship. Hyundai is also working on several new destroyers, including an “Arsenal Ship” with robust land-attack capabilities, that complement the LPX II in a wide range of battlefield roles.

The ROKN’s carrier ambitions became evident with Seoul’s October 2019 decision to purchase twenty F-35B fighters. The F-35B is a short take-off and vertical landing variant of the F-35 Lightning II fifth-generation stealth fighter, designed in large part to operate from aircraft carriers and other air-capable ships.

It bears asking why South Korea, whose foremost security threat stems from a contiguous land power to its north, might need an aircraft carrier to begin with. Carriers are a tool of power projection, but South Korea’s naval interests seemingly don’t extend beyond the defense of its shores from a prospective attack by the Democratic People’s Republic of Korea (DPRK).

There are several facets to this question. First, consider that the DPRK’s modern threat is not predicated on its large but under-equipped land army—by almost any relevant metric, South Korea’s ground forces are markedly superior to their northern counterpart. Instead, it is North Korea’s increasingly sophisticated arsenal of nuclear and conventional warheads that poses an existential challenge to ROK’s security. A recent Congressional Research Service report underscored a development in DPRK’s strategic doctrine that has drawn the alarm of South Korean observers for the past several years: North Korea aims to circumvent ROK’s coastal network of Terminal High Altitude Area Defense (THAAD) missile defenses by launching submarine-based ballistic missiles outside of THAAD’s effective engagement range.

But the immediate and existential concern of countering North Korean missile capabilities is not the only, or even primary, purpose behind ROKN’s ongoing effort to acquire an aircraft carrier. China and Japan—two neighboring powers both of which have active territorial and maritime disputes with South Korea—are forging ahead with their own aircraft carrier projects. China’s People’s Liberation Army Navy plans to build six carriers by 2035, while Japan’s Maritime Self-Defense Force has converted the Izumo-class destroyer into a fixed-wing platform capable of carrying their recently-purchased F-35B squadron.

At a time when South Korea’s peer competitors are striving to expand their naval reach, the ROKN has concluded that it can ill afford not to invest in strategic tools to project naval power across the broader Pacific region.