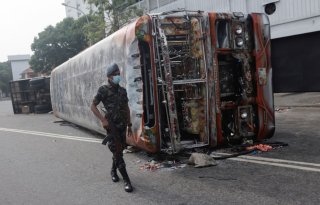 Mahinda Rajapaksa, the embattled prime minister of Sri Lanka, tendered his resignation on Monday after weeks of demonstrations against him and his younger brother, President Gotabaya Rajapaksa, in Colombo, the country’s capital.

Sri Lanka’s protests began in March over the country’s increasingly dire financial conditions. In recent months, the Sri Lankan government has been unable to import sufficient fuel and medicine, and electricity shortages have led to recurring blackouts. In early May, Sri Lanka’s finance minister announced that the country’s foreign exchange reserves had dropped below $50 million. The reserve shortage rendered Sri Lanka—which has a GDP of roughly $80 billion—nearly bankrupt, prompting it to seek emergency relief from international creditors, including China and the World Bank.

As the country’s financial situation continued to decline, the protest encampments outside grew larger, prompting the government to declare a curfew. This development escalated violence between protesters, Rajapaksa supporters, and Sri Lankan security forces. A series of clashes over the weekend led to 151 hospitalizations in Colombo, leading the government to call in additional armed forces for security on Monday and impose a twenty-four-hour curfew until Tuesday morning. The United States condemned the attacks against civilians, with U.S. ambassador to Sri Lanka Julie Chung requesting “a full investigation … including the arrest [and] prosecution of anyone who incited violence.”

It is unclear what will happen to the protest encampments after the elder Rajapaksa’s resignation, as his brother remains the president. President Rajapaksa is usually regarded as the more powerful of the two brothers. Formerly an army officer and Sri Lanka’s defense minister, he came to prominence in the country after playing a critical role in the military defeat of the Tamil Tigers.

Rajapaksa’s military victory over the Tamil Tigers helped cement him as one of Sri Lanka’s most well-known leaders, paving the way for his success in the country’s 2019 presidential election. However, after entering office, Rajapaksa and his brother passed a series of enormous tax cuts, drastically decreasing government revenue. To make up for the shortfall, Rajapaksa oversaw an expansion in Sri Lanka’s money supply, resulting in high inflation and hurting many Sri Lankans’ savings.