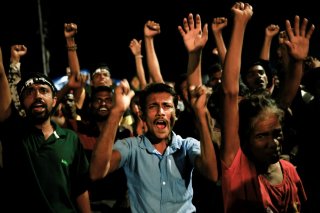 Sri Lankan president Gotabaya Rajapaksa, who fled the country earlier in the week after thousands protested his perceived mismanagement of the country’s economy by storming his residence, submitted his resignation on Thursday, ending a week-long political crisis and paving the way for the formation of a new government.

Rajapaksa’s resignation was issued via email after the president, his wife, and two bodyguards left the Maldives, his original exile destination, for Singapore. It is set to take effect on Friday, although a government representative claimed that “the authenticity and the legality” of the email would first need to be verified by Sri Lankan authorities. News of the resignation prompted massive celebrations within Colombo, Sri Lanka’s capital, where demonstrators danced and set off fireworks—actions theoretically in violation of a curfew order, but one which the country’s security forces declined to enforce. After the resignation was announced, protesters also departed the presidential residence, having earlier promised to remain present until Rajapaksa left office, and returned control of the compound to Sri Lankan police.

Prior to his resignation, Rajapaksa had announced from exile that Prime Minister Ranil Wickremesinghe, whose residence was also stormed over the weekend and who had also agreed to leave office after the formation of a new government, would become the country’s acting president upon his resignation. The announcement led to further protests, including an intrusion by demonstrators into the country’s parliamentary building.

The Singaporean Foreign Ministry claimed that Rajapaksa had been allowed to enter, although it claimed that his entry into the city was for a “private visit.”

“He has not asked for asylum and neither has he been granted any asylum,” the ministry announced in a statement. “Singapore generally does not grant requests for asylum.”

Upon his arrival in Singapore, Rajapaksa was reportedly heckled by a group of Sri Lankan migrant workers who had gathered at the airport to welcome him—leading the city-state’s police force to issue a statement declaring that “action will be taken against anyone participating in a public assembly that is illegal.” Protests are illegal in Singapore without prior permission, which is rarely granted.

Protests against the Sri Lankan government—and particularly Rajapaksa, whose decision to slash taxes after his election to the presidency in 2019 is widely acknowledged to have deepened the country’s economic crisis—have built steadily since April. Although Rajapaksa’s younger brother, former prime minister Mahinda Rajapaksa, was forced from office in early May, the elder Rajapaksa declared that he would not leave office “under any circumstances,” a stance he maintained until shortly before his exile.