Stealth Showdown: Could the F-35 Start a Deadly Arms Race in Asia? 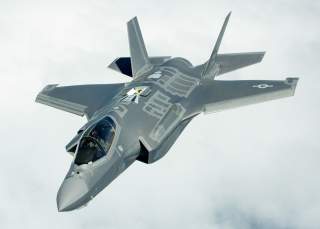 On January 2019, Singapore announced that it planned to buy a limited number of F-35 fighters for evaluation purposes. While this didn’t come as a surprise to many Singaporean military watchers, the decision comes at a tense time for Singapore, with China becoming more assertive and rising tensions with Malaysia.

Could the F-35 purchase accelerate the arms race in the region? How might the F-35’s unique technical characteristics make it suitable for Singapore’s tactical environment?

In order to understand the effect that the F-35 will have on Singapore’s national defense, it is important to recognize that they are slated to replace Singapore’s advanced F-16 variants. Singapore operates around 60 F-16 Block 52s, which are underwent an upgrade program that gave them more advanced features such as AESA radars. Nevertheless, the Singapore defense ministry (MINDEF) expects that these aircraft will be obsolete by 2030.

In Singaporean service, the F-16 serves in a multirole capacity. However, the most recent upgrade appears to have prioritized its role as a strike aircraft rather than air-to-air combat. While some air-to-air missiles are included in the package, they are short range AIM-9X.

The majority of equipment purchased is meant for the strike mission, from laser guided kits for bombs to the AGM-65 Maverick air-to-ground missile. For a pure air-to-air mission, Singapore is likely to rely on it’s F-15SGs, which are optimized for the role with additional systems like infrared search and track (IRST).

As such, if the F-35 is expected to replace the F-16, it is likely because it is seen by MINDEF as the most survivable light strike aircraft in an airspace that will be filled with increasingly deadly threats. While the number of F-35s the SAF fields may not be enough for saturation strikes on large opponents like China which possess significant anti-access capabilities, the F-35 may significantly decrease the risk of preemptive strikes against less prepared opponents like Malaysia. Preemptive strikes are an important part of Singaporean doctrine given that the city-state has no defensive depth, so increased capability in that realm might have a deterrent effect.

The F-35B variant could also significantly increase survivability in event of runway destruction by a surprise strike due to its VTOL capability. Because Singapore is very small, the airbases it has are prominent targets. While a strike to these could knock out the ability for F-16s or F-15s to fly sorties, the VTOL capabilities of the F-35 might allow it to stay in the fight longer than traditional platforms.

Singapore maintains the capability to create field-expedient airfields in their Air Power Generation Command, the short takeoff runs of the F-35 would allow this command to do far more with less.

The F-35 also integrates well with the other American aircraft Singapore fields: it uses the same datalinks, radar, and pilot ergonomics. It also integrates well with modern Singaporean doctrine. The Singaporean military is striving to be a highly networked, agile force, in what they call IKC2, Integrated Knowledge-based Command and Control. The ability of the F-35 to provide a rich sensor picture of a tactical environment would make it a very important asset in the IKC2 doctrine.

Moving onto strategic considerations, Singapore’s decision to buy F-35 puts it in what China derisively calls the “U.S. F-35 friends circle”, a group of nations that border China that have bought F-35s to counter China’s increasingly powerful air force. This group currently includes South Korea, Japan, and Australia. Singapore’s purchase of the F-35 reaffirms its commitment to defense cooperation and integration with these regional allies, in what some call the “strategic quadrangle”.

Singapore’s decision to announce the F-35 purchase during a series of sea and airspace disputes with Malaysia suggest that the F-35s capability could become a “big stick” that it might wield in the future in regional affairs.

While Malaysia’s air force is good for the region, the latest aircraft it is considering purchasing are only fourth generation and would probably only be comparable to the upgraded F-16s Singapore already fields. The F-35 would be a significant strategic advantage, and could pressure Malaysia to perhaps look to Russia for more advanced anti-access weapons.

The author would like to thank Timothy Soh of Defense Politics Asia for assistance.