A Stealthier Drone? The U.S. Air Force Said No Thanks. 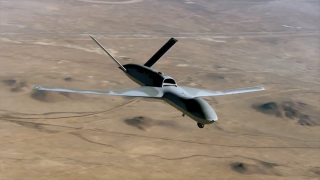 The U.S. Air Force in its 2021 budget proposal asked to abruptly halt purchases of the General Atomics MQ-9 Reaper drone, ending acquisition at 337 drones instead of 363. The service cited the propeller-driven Reaper’s relative vulnerability to enemy air-defenses.

The move shocked General Atomics executives. Perhaps especially because the California-based drone-maker a decade ago tried, and failed, to sell the Air Force a more survivable unmanned aerial vehicle.

But for all its improvements, the Predator C—or Avenger—fell flat with the Air Force, its biggest prospective client. The flying branch’s Air Combat Command recounted the chilly rejection in its official history for 2011.

The satellite-controlled Avenger is faster, stealthier and carries more weaponry than does the earlier MQ-9 Predator B model, a.k.a. “Reaper.”

The Reaper currently is the Air Force’s main armed drone, but in its standard version it suffers the same inadequacies that plagued the original, 1990s-vintage MQ-1 Predator A that the service retired in 2018.

It can’t fly in bad weather and its satellite-relayed control signal tends to lag, which can cause crashes when operators sitting in trailers in the United States can’t respond fast enough to problems.

It’s also possible to hack the Reaper’s video stream … and jam its GPS.

The Avenger improves on the Reaper in important ways, according to General Atomics. “Its unique design, reduced signature and speed increases its survivability in higher threat environments and provides potential customers with an expanded quick-response armed reconnaissance capability.”

But the Air Force was unimpressed. In late 2011, it bought one Avenger for testing for an estimated $15 million. And by the end of the year, the brass had passed their judgement. The Avenger “offered only minor improvements over the MQ-9,” according to the official history.

And the Avenger packs its weapons in an internal bay, undoubtedly making the drone harder to detect on radar than the Reaper, which carries its munitions under its wing, in full view of enemy sensors.

But a slightly faster, more capacious drone with somewhat greater stealth isn’t really what the Air Force wanted. The flying branch’s ideal future drone, which it called the MQ-X, “had to be survivable in a contested environment, weather tolerant and have robust and agile communications,” according to the history.

Presumably, the Avenger inherited the same shortfalls as the Reaper and Predator when it comes to flying in bad weather and communicating swiftly. And reading between the lines in the official history, it’s apparent the Avenger isn’t stealthy or tough enough to represent a worthwhile improvement over the Reaper, from the government’s point of view.

The Air Force desired a “hardened” MQ-X airframe, the history states—an airframe that could “withstand significant battle damage, while the on-board systems detected, avoided and countered both physical anti-air and electronic communications and GPS jamming threats.”

Ideally, the MQ-X would meet all these requirements. The Avenger, however, could not—according to the Air Force.

Weirdly, just a few months after rejecting the Avenger, the flying branch also cancelled the MQ-X project, claiming that it could simply upgrade its planned fleet of 300-plus Reapers.

General Atomics offered three related Reaper upgrades. One adds a new 88-foot-span wing, replacing the existing 66-foot wing. The longer wing boosts lift and improves fuel efficiency. Plus, Reaper users can add two new fuel pods in place of some of the drone’s weapons, each carrying a hundred or so gallons of gas to boost flying time.

“At this point, we don’t see a need, or we don’t plan in the near term to invest in any sort of MQ-X-like program,” Lt. Gen. Larry James, an Air Force recon official, said in early 2012.