Stoltenberg: NATO Ready to Intervene if Kosovo Tensions Boil Over 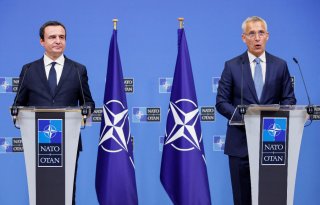 NATO’s leadership said it is ready to intervene in Kosovo if tensions continue to escalate with neighboring Serbia.

"We have now a significant mission, a military presence in Kosovo close to 4,000 troops," said NATO chief Jens Stoltenberg at a news conference after meeting with Serbian president Aleksandar Vucic in Brussels. "If needed, we will move forces, deploy them where needed and increase our presence. We have already increased the presence in the north. We are ready to do more," he added.

Tensions flared late last month after Kosovo announced a new law requiring Serbs in Kosovo to apply for car license plates issued by Kosovar authorities. Local officials said last year that they will not renew a 2011 deal with Serbia under which the government of Kosovo recognized Serbian license plates. The move prompted backlash from ethnic Serbs in Kosovo, who blockaded roads in protest.

Facing pressure from Washington and Brussels, Kosovo prime minister Albin Kurti agreed on July 31 to postpone enforcement of the new license plate guideline until September 1. Serbia, which considers Kosovo an integral part of its territory, accuses Kosovar authorities of infringing on the rights of the local Serbian minority. Serbs comprise roughly 5 percent of Kosovo’s population of 1.8 million, the vast majority of which is made up of ethnic Albanians.

Stoltenberg held separate meetings in Brussels on Wednesday with Vucic and Kurti. The two leaders met on Thursday for European Union-facilitated talks, also attended by the EU’s head of diplomacy, Josep Borrell. "I am convening this morning the High-level Belgrade-Pristina Dialogue meeting. Recent tensions in the north of Kosovo have demonstrated yet again that it is time to move forward towards full normalization. I expect both leaders to be open and flexible to find common ground", Borrell said.

"We are going to have difficult discussions tomorrow. We do not agree almost on anything," Vucic said on the eve of the negotiations. "We have our history, which is not an easy one, which is not a simple one. But we do want to strengthen further cooperation both for ... NATO and we want to avoid any kind of possibility of escalation or conflict," he continued.

Borrell later announced that the Thursday talks ended without agreement, adding that Vucic and Kurti expressed a willingness to participate in further discussions ahead of the September 1 deadline to pave the way for the possible normalization of relations between their two countries.

"We are at a critical time for Europe,” Borrell warned. “After the Russian invasion of Ukraine, we are facing a dramatic and very dangerous moment for our continent, and this is not a moment for increasing tensions.”