UN Chief and Erdogan to Visit Ukraine for Trilateral Summit 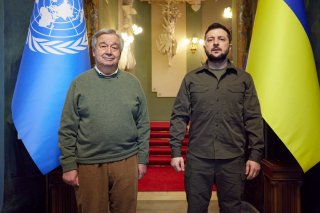 UN Secretary-General Antonio Guterres is scheduled to meet Ukrainian president Volodymyr Zelensky in Lviv, Ukraine, on Thursday, for a three-way summit alongside Turkish leader Recep Tayyip Erdogan, according to AFP.

Guterres’s spokesman, Stephane Dujarric, announced the meeting, claiming that Zelensky had invited the two leaders to attend the meeting. He also claimed that the three leaders would visit Odesa, Ukraine’s largest port, the following day to examine Ukrainian grain exports permitted under a Turkish-mediated agreement between Russia and Ukraine.

The three leaders are also slated to discuss the situation at the Zaporizhzhia nuclear power plant in eastern Ukraine, the largest nuclear plant in Europe and a potential flashpoint for a nuclear disaster after it was damaged in the fighting. Russia and Ukraine have accused each other of shelling the plant, although the United States and other Western nations have supported Ukraine’s account.

The three leaders will not visit Zaporizhzhia, as it is near the front lines of the ongoing Russian invasion of Ukraine. The International Atomic Energy Agency, which oversees the world’s nuclear facilities and is loosely affiliated with the United Nations, has indicated its interest in visiting the site. However Russian officials have insisted that they could not guarantee the safety of any inspectors traveling to the site from the Ukrainian side, likely making the mission too dangerous to undertake in the near future.

Following his trip to Ukraine, Guterres will also travel to the “Joint Coordination Center'' in Istanbul, an ad hoc agency created to facilitate the export of Ukrainian agricultural products from Odesa and two other Ukrainian ports. Russian, Ukrainian, and Turkish officials comprise the group, and the UN oversees it.

Before the finalization of the agreement on July 22, Ukraine—one of the world’s largest agricultural producers and thought to be responsible for roughly thirty percent of the world’s wheat exports—was largely blocked off from international commerce by the Russian Navy’s presence in the Black Sea. The abrupt cut-off of Ukrainian grain supplies led worldwide grain prices to skyrocket increased food insecurity in several African nations that have historically relied on Ukraine for imports.

Russian and Ukrainian officials have acknowledged Turkey’s central role in the successful outcome of the negotiations, positioning it as a future mediator for the conflict. Dujarric indicated in his statement that the three leaders would discuss “the need for a [negotiated] political solution to the conflict,” a process in which Turkey will likely continue to be involved.