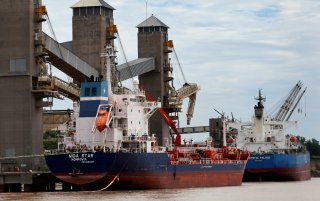 The Ukrainian government said it hopes to resume grain exports from the Black Sea port of Odessa despite a Russian missile strike on Sunday.

“We expect that, as announced, despite the incident that happened on Saturday, [export of grain] will start in the coming days. Hopefully we’ll see some early results this week,” Markiyan Dmytrasevych, Ukraine’s deputy minister for agrarian policy and food, told reporters.

Russian forces struck Odessa late last week with two Kalibr cruise missiles. The attack came just one day after a four-way deal was signed between Turkey, Ukraine, Russia, and the United Nations to unblock grain exports out of Ukraine’s Black Sea coast. The deal establishes a maritime corridor for unimpeded shipments of grain out of the country.

Russian foreign minister Sergey Lavrov defended the strike on Monday during a press conference, telling reporters that there is nothing in the agreement preventing Russia from targeting Ukrainian military infrastructure in Odessa. "Speaking about the episode, which you mentioned that happened in Odessa, there is nothing in the commitments that Russia signed up to in Istanbul on July 22 that would prohibit us from continuing our special military operation, destroying military infrastructure and other military targets," he said. Lavrov claimed that the strike targeted a Ukrainian Navy cutter and ammunition depot allegedly containing Western-provided Harpoon anti-ship missiles.

Ukrainian officials previously insisted that there was technically no direct deal between Russia and Ukraine. Instead, Moscow and Kyiv reportedly signed separate “mirror” agreements with Turkey and the UN. “We trust UN and Turkey, who with we signed the corresponding documents with,” said Ukrainian president Volodymyr Zelenskyy. “This is a very important moment to control the security of the corridors for the grain exports. And further down, there’ll be questions to Turkey and United Nations: how they can control Russian Federation who showed it could strike with rockets. … That shows their attitude to their agreements and Turkey.”

Ukraine’s infrastructure minister, Oleksandr Kubrakov, told Turkish defense minister Hulusi Akar in a phone call that the first grain deliveries are expected to commence as soon as this week, confirming that there will be a partial de-mining of Ukraine’s Black Sea coast to render shipping lanes safe for commercial vessels. “[Minister Akar] expressed his satisfaction with the announcement that the grain shipment will start this week, it is important that the first ship starts sailing as soon as possible,” the Turkish Defense Ministry said in a readout of the call.