How the West Failed to Isolate Russia 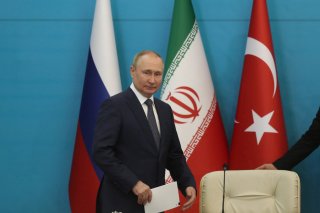 Russian president Vladimir Putin has given the green light to a Black Sea grain export deal, the first major agreement between Moscow and Kyiv since Russia invaded Ukraine on February 24.

“This is an agreement for the world,” said UN secretary-general António Guterres on Friday. “It will bring relief for developing countries on the edge of bankruptcy and the most vulnerable people on the edge of famine. It will help stabilize global food prices which were already at record-levels even before the war.”

The agreement, which was negotiated by Ukraine, Turkey, Russia, and the United Nations, sets forth a framework for the resumption of global grain shipments out of Ukraine. The deal provides for the creation of a “control center,” staffed by UN, Turkish, Russian, and Ukrainian officials, in Istanbul to monitor and coordinate grain exports out of a designated maritime safe corridor. The arrangement covers food exports from the Ukrainian port cities of Odessa, Chernomorsk, and Yuzhny.

Full details of the plan were not immediately published. Russian officials previously insisted that Ukrainian vessels carrying grain out of the country must be subject to inspection by the Russian Navy on their return trip, citing the concern that these ships could be used to smuggle military equipment back into Ukraine. Under the finalized version of the agreement, inbound Ukrainian ships can be inspected by the Turkish military.

The four participating parties reached a preliminary agreement as early as last week, but the deal had to be greenlit by Putin. Putin met with Turkish president Recep Tayyip Erdogan earlier this week to finalize the agreement, and thanked his Turkish counterpart for Ankara’s proactive efforts to mediate a grain export deal over the past several months.

Ukrainian presidential aide Mykhailo Podolyak stressed that there was technically no direct agreement between Russia and Ukraine. Instead, both countries separately signed the same “mirror agreement” with Turkey and the UN. Nevertheless, the deal marks the first substantive agreement—even if by proxy—between Moscow and Kyiv since the beginning of the Ukraine War.

Putin arrived in Iran on Tuesday to meet with Supreme Leader Ayatollah Ali Khamenei. Tehran offered a statement of full-fledged support for Russia’s war effort in Ukraine: “War is a hostile, harsh matter & the Islamic Republic never favors seeing ordinary people afflicted by wars. However, in the issue of Ukraine, had Russia not initiated taking action, the other side would have started a war,” tweeted Khamenei. “NATO is a dangerous entity. The West is totally opposed to a strong, independent Russia. If the way is opened for NATO, it will recognize no limits. If it hadn’t been stopped in Ukraine, it would have later started a similar war in Crimea,” Khamenei added. Russia and Iran found common cause in bucking Western sanctions; Russia’s Gazprom gas giant inked a $40 billion deal with the National Iranian Oil Company (NIOC) to help Iranian producers develop oil and gas fields across the country.

Also on Tuesday, Putin attended a trilateral summit with Erdogan and Iranian president Ebrahim Raisi to discuss the conflict in Syria. Russia and Iran have emerged as key backers of embattled Syrian leader Bashar al-Assad, while Turkey supports anti-government factions in the country’s north. The summit did not resolve these underlying differences, with Erdogan failing to coax Russian and Iranian support for a new Turkish offensive in northern Syria under the pretense of combating “terrorist” groups. A joint statement published by the three participants—collectively known as the Astana Platform—reaffirmed their commitment to Syria’s territorial integrity, adding that “security and stability” in northeastern Syria “can only be achieved on the basis of preservation of the sovereignty and territorial integrity of the country.” Erdogan told reporters on his flight home that he will not shelve the military option in northern Syria until Turkey’s security concerns are addressed.

The grain deal capped off a week of Russian diplomacy that experts say was intended to show that the Western campaign to isolate Moscow economically and politically has failed. “I think the Russians would spin the meeting as a demonstration that they’re not actually isolated, they’re still a major player in the Middle East,” John Drennan of the U.S. Institute of Peace told CNBC. “But I do think, to [National Security Council spokesman John Kirby’s] point, it does show a bit of desperation that the Russians are having to go to the Iranians for military support,” he added, referencing Kirby’s earlier assertion that Putin’s Mideast trip “shows the degree to which Mr. Putin and Russia are increasingly isolated.”

Though Russia has been increasingly isolated from the West and certain Western-led institutions, Putin’s meetings in Tehran point to a different and altogether more unsettling phenomenon: despite ongoing attempts by European and U.S. policymakers to marshal a united global front against the Kremlin, a substantial part of the non-Western world has maintained neutrality or, as in the case of China and Iran, explicitly endorsed Russia’s framing of the conflict.