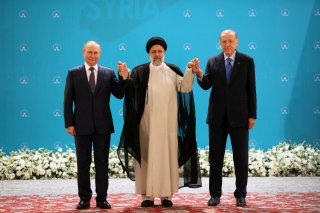 The National Iranian Oil Company (NIOC) and Russia’s Gazprom gas company signed a memorandum of understanding on Tuesday, as per Reuters. The deal, valued at around $40 billion, enlists Russia’s aid in helping Iranian producers to develop oil and gas fields across the country. Iran holds one of the world’s largest reserves of oil and natural gas but has been stymied by Western sanctions from rapidly developing its energy export sector.

Putin’s talks with Raisi will be followed by a meeting with Turkish president Recep Tayyip Erdogan. The upcoming meeting is expected to center on finalizing a deal to allow grain exports out of Ukraine’s Black Sea ports. It was reported last week that Ukrainian, Russian, Turkish, and United Nations officials have agreed on a framework to guarantee continued shipments of grain out of Ukraine, but that the deal must still be greenlit by Putin.

There will also be a trilateral Russia-Turkey-Iran meeting, known as the Astana Platform, to discuss the ongoing conflict in Syria. Iran and Russia are key supporters of Syrian president Bashar al-Assad while Turkey continues to back anti-government groups to the country’s north.

The Iran visit marks Putin’s second foreign trip—and first such foray outside of the former Soviet Union—since Russia invaded Ukraine on February 24. Putin’s meetings in Tehran come shortly on the heels of President Joe Biden’s Middle East trip to Israel and Saudi Arabia. Experts say the Kremlin seeks to demonstrate through its high-level contacts in Iran that the Western campaign to isolate it economically and geopolitically has failed.