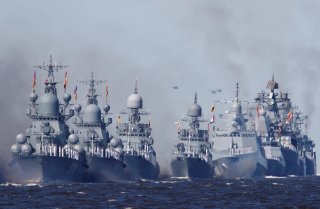 A fleet of commercial fishing boats from Alaska reportedly had a close encounter with the Russian Navy last week. One U.S. fisherman, who claimed he was part of a commercial flotilla 80 miles from the U.S.-Russian maritime boundary in the Bering Sea, said he was ordered to "move" while other vessels reported being "buzzed" by Russian aircraft and ordered out of the area on a specific heading.

Steve Elliott, captain of the fishing trawler Vesteraalen, told Alaska Public Media that he was issued a warning, first in Russian and then in English to change course.

"Three warships and two support vessels of theirs were coming and would not turn," Elliott told the Alaskan media outlet via the Vesteraalen's satellite phone. "And they came marching right through the fleet."

The incident, which has since drawn the attention of both of Alaska's U.S. Senators, is reportedly under investigation by three different federal agencies and it has been described as "unprofessional interactions" by the Russian military.

In three decades of fishing, Elliot said he has never seen anything like what he encountered last week – but experts have said it is unlikely to be the last encounter between Russian and American vessels in the region.

"Welcome to the future," Heather Conley, an Arctic expert at the Center for Strategic and International Studies, told Alaska Public Media. "Unfortunately, I think we’re going to see more of this type of exercising and significant military presence in the Arctic — we just haven't seen it for a long time."

While the waters of the Bering Sea haven't seen all that much activity this spring and summer, the same can't be said for the skies overhead. For the past several months the U.S. Air Force has had to scramble fighter jets to intercept Russian bombers that have approached Northern American airspace with disturbing regularity.

In May and again in June Russian nuclear-capable Tu-95MS strategic bombers from the Russian Aerospace Force conducted what Moscow described as "patrol flights" in the neutral waters near Alaska. Russia's venerable Cold War era Tupolev Tu-95MS Bear turboprop-powered strategic bombers, which are now armed with the latest X-101 cruise missiles, is among the only aircraft to have the range to fly round-trip from bases in Russia to potential targets in North America without the need to refuel.

It is likely the Russian warships were from the country's Pacific Fleet, which is in the process of being upgraded and will receive 15 new warships and supply vessels that can operate in the Far East and Eastern Pacific by the end of this year. Rebuilding the Pacific Fleet has been a priority for Russia, and among the 15 new vessels that will join the Pacific Fleet are the Gremyashchy corvette of project 20385, the Pertropavlovsk-Kamchatsky diesel-electric submarine of project 636.3, the Yakov Balyaev minesweeper of project 12700, a Raptor-class countersubversion boat of project 03160, the Andrey Stepanov sea tug and two rescue boats of project 23040.

In addition to surface ships, the fleet will be supported by an increasingly powerful submarine force. Earlier this year Russian Navy Commander-in-Chief Admiral Nikolai Yevmenov announced that the Pacific Fleet would soon be joined by six Project 636.3 diesel-electric submarines.

This could mean that fishermen such as Elliot could expect to see more Russian warships and submarines in the not too distant future.