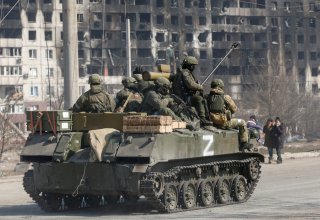 The southeastern port hub of Mariupol has all but fallen to the invading Russian forces, according to local Ukrainian officials.

"Not everything is in our power," said Vadym Boichenko, the mayor of Mariupol, in a live television interview on Monday. "Unfortunately, we are in the hands of the occupiers today."

Boichenko called on all remaining residents of Mariupol to evacuate the city immediately. "According to our estimates, about 160,000 people are in the besieged city of Mariupol today, where it is impossible to live because there is no water, no electricity, no heat, no connection," he said, according to CNN. "And it's really scary."

Mariupol has been besieged by Russian forces since late February; according to recent drone footage, large swathes of the city have been leveled by a steady cadence of airstrikes and artillery fire. Statistics released by Ukrainian officials say that 90 percent of the city’s residential buildings were damaged, 40 percent of which were entirely destroyed.

Last week, Kyiv rejected a Russian ultimatum for Mariupol’s defenders to lay down their arms in exchange for safe passage out of the city. Russian and Russian-aligned separatist forces reportedly proceeded to storm the city, engaging its defenders—the ultra-nationalist Azov Battalion—in intense urban combat. Chechen leader Ramzan Kadyrov announced on March 25 that his forces had taken control of Mariupol’s city hall, suggesting that Russian troops had gained significant ground within the span of several days. Russian media outlets claimed that Russian forces were sweeping the city, going house-to-house in an effort to flush out Ukrainian troops that could be trying to blend in with the civilian population in order to potentially flee Mariupol.

Reports last week suggested that the organized remnants of Azov had retreated further inward and were mounting a last stand in the city’s southernmost district; the city’s harried defenders were reportedly split in half by a Russian pincer movement and subsequently routed. With the nearby strategic cities of Melitopol and Berdyansk solidly in Russian hands, Ukraine’s military is not in a position to mount an effort to relieve Mariupol.

Though the lack of third-party observers makes it difficult to fully verify the situation on the ground, there is a growing body of circumstantial evidence, increasingly corroborated by local officials, to suggest that Mariupol is now almost fully under Russian control. Moreover, any remaining Ukrainian defenders are likely too heavily outnumbered to pose meaningful resistance.

The capture of Mariupol allows the invading Russian forces to secure a land corridor between Russian-held Crimea and pro-Russian separatist forces in the Donbas region, a major milestone in Russia’s ongoing efforts to consolidate control—whether directly or through proxies—in eastern Ukraine.