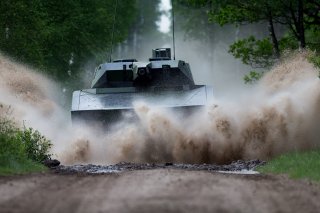 The Optionally Manned Vehicle, an infantry fighting vehicle, is intended as a high-tech, more mobile and more lethal Bradley. The Army is already working closely with industry on accelerated plans to plans to engineer a mobile infantry carrier able to deploy quickly, traverse rough terrain, keep pace with maneuvering infantry and yet also operate with sufficient protection necessary to thwart the most advanced enemy attacks.

The effort is currently on the fast track; many industry teams are already offering vehicles, and the timeline has been accelerated by nearly a decade. The Army plans to have a combat-ready operational vehicle by 2026.

“Our original vision was 2035. We now have a challenging test schedule, so we can’t afford a clean sheet design. We may need a power train and suspension that are already in use somewhere. We need to bring together mature components, with less risk to the schedule,” Next Generation Combat Vehicle, Optionally-Manned Vehicle Program Manager Col. Jim Schirmer, said in October at the Association of the United States Army Annual Symposium.

Three of the major teams competing to build the vehicle include General Dynamics Land Systems, BAE Systems-- and a US-German team of Raytheon and Rheinmetall Defence NGCV- called the Lynx.

(Of course is important to point out that the Army, naturally, does not endorse any particular platform or industry offering - as the service is currently evaluating a number of options. The Army speaks about requirements and its vision for the vehicle, not about specific vendor offerings)

The Lynx represents an effort to combine German combat-vehicle engineering and expertise with Raytheon’s weaponry, sensor and computing technology.

Rheinmetall is known for engineering a range of combat vehicles, to include the much-discussed Leopard 2 Main Battle Tank and Puma Infantry Fighting Vehicle. The Leopard is currently in use by more than 15 countries, to include Canada, Austria, The Netherlands, Spain, Chile, Denmark, Norway and others. Several reports state that Canada used about 20 German-made Leopard 2A6Ms in Afghanistan.

“We’ve been working for three years to analyze future customer requirements. The Lynx has a a payload of upt 18K kilos. Threats change on the battlefield and technologies change as well,” Ben Hudson, Vice President of Combat Vehicle Development, Rheinmetall, told Warrior Maven in an interview.

Upon initial examination, the Lynx appears to incorporate some advanced characteristics of the widely known Rheinmetall-built Puma Infantry Fighting Vehicle - specifically with respect to anti-tank weaponry, 360-degree sensors and targeting technology. Naturally, Raytheon and Rheinmetall developers emphasize that the Lynx incorporates many technologies far more advanced than those used in the Puma - even if some of the operational concepts and technological aims appear similar.

The Puma is equipped with heavy and light guns, grenade launchers, a 30mm cannon and provisions for anti-tank missiles, according to information from Defencylopedia.

The Puma has a crew of three and an ability to carry 6 soldiers in the rear, a configuration which matches the Army vision for its Optionally Manned Vehicle.

“The Puma can fire accurately and effectively up to a distance of 3000 m and 400 rounds are carried on board. The secondary gun is the 5.56 mm x MG4 machine gun.The entire vehicle is coated with a special IR-suppressing paint which reduces its thermal signature and makes it difficult for hostile missiles to target it,” Defencylopedia writes.

Hudson explained that Lynx development has been underway for several years, making it what he called a workable foundation from which to architect a new NGCV-Optionally-Manned Vehicle. The idea is to build a vehicle able to both anticipate and accommodate Army requirements on the much-accelerated time frame. Strategically speaking, this means industry is challenged to combined off-the-shelf or ready combat systems with emerging or new systems as well. The idea is to both produce something near term, yet also build something which substantially brings armored vehicle combat technology to a new level.

The Raytheon-Rheinmetall Lynx emerges from the recently unveiled Lynx FF41 Next-Generation Combat Vehicle; the platform can be traced to its predecessor which arrived in 2016, the Lynx KF31. The Lynx FF41 vehicle can be built in a number of variants, to include Infantry Fighting Vehicle, Command and Control, Armored Reconnaissance, Repair and Recovery and Ambulance models, Rheinmetall information says.

Given current state of the art technology, engineering a vehicle that is both sufficiently survivable and mobile seems, in some respects, to be a contradiction in terms. Armor, most of which is heavy, is needed for protection, and lower-weight is needed for speed, maneuverability and deployability. Therefore, prospects for achieving the apparent paradox could include lighter weight armor composites, unmanned vehicles and long-range, high-fidelity, AI-enabled sensors able to ID threats before they are able to attack.

While these requirements are still being refined as the Army works with industry, Army developers have indicated some specifics regarding the service’s approach to the new platform.

For instance, Schirmer told Warrior that the new vehicle will operate with a three-man crew, carry six-soldiers in back and ultimately fire a 50mm cannon.

“Under armor volume is important for the size and weight of the vehicle. We will ultimately go to a 50mm canon, but it may begin as a 35mm,” Schirmer said.

New longer-range "TOW missile-compatible" weapons will arm the new platform, Schirmer said, as a way to destroy enemy armored vehicles at a safer stand-off range. Also, these new missiles are very likely to be configured with newer, more varied explosives able to destroy enemy tanks, armored vehicles and infantry formations to a much greater extent than existing weapons can.

Raytheon developers say the Lynx is armed with an improved TOW missile, developed with a new propulsion system for an advanced, long-range weapon to track and destroy enemy armored vehicles from farther distances. The most recent TOW missiles, according to descriptions from the Federation of American Scientists, include hardened “guidance links with a thermal beacon which improves operations in dust, smoke and other obscurants.”

The weapon is capable of penetrating more than 30-inches of armor and has a range of more than 3,000-meters. Its mission, according to FAS, is to attack and destroy tanks and other key targets such as non-armored vehicles, crew-served weapons and missile launchers. It uses aerodynamic contours to speed travel time to targets.

It can launch 3 missiles in 90-seconds and fire from a tripod, vehicle or helicopter, FAS writes.

“In almost all situations, the fight ended after firing the TOW. It can bring in either close air support or artillery before the enemy even realized he was being seen.” Maj. Gen. David H. Petraeus, former 101st Airborne Division Commander, said several years ago when a Maj. Gen. - according to Army information on the TOW missile.

The requirements for the vehicle are grounded in the use of unmanned technology, such as an ability to launch attack drones, control nearby unmanned vehicles and integrate advanced video surveillance. As part of this, the vehicle will leverage advanced networking, to include new software and sensors to engineer secure communications links to pass high-speed video back to the operator, Schirmer explained.

“The ability to control a small drone will give us eyes down range,” Schirmer explained.

AI-enabled sensors and targeting technology will also be a pivotal technology when it comes to engineering a vehicle that is both highly-mobile and survivable.

When it comes to new sensor technology, there are several pertinent areas of technical exploration.

“The vehicle in and of itself from a systems capability uses a 3rd Gen FLIR. We are currently developing that in support of the Army. We want to achieve overmatch capability from a sighting capability,” Kim Ernzen, Vice President of Land Warfare Systems, Raytheon, told Warrior Maven in an interview.

Much like the Puma requirements call for a 360-degree array of cameras around the vehicle, as a way to alert crews of approaching threats from all directions.