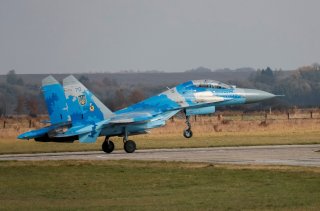 The Su-33 could be Russia’s most dangerous carrier fighter. But the airplane’s footprint is somewhat larger—and on Russia’s only aircraft carrier, available real estate is at a premium.

The Su-33 is closely associated with Russia's only aircraft carrier, the Admiral Kuznetzov. And since the Su-33 is a carrier-capable fighter, it is a familiar sight on the carrier’s uniquely sloped ski-jump flight deck, although it typically lands less often. The naval fighter is painted in a light blue livery, and its camouflage pattern is difficult to miss.

Russia’s naval fighter is derived from the earlier Su-27 airplane, which is an exciting plane. The Su-33 airframe is outwardly similar. However, some crucial components have been optimized for taking off and landing from aircraft carriers. Given the limited runway length, this operation stresses the airplane fuselage and wings.

The Su-33 has roughly 8 percent greater wing area than the Su-27 during a routine flight. To accommodate the relatively short runway distances associated with aircraft carriers. The Su-33 also sports a pair of canards on the fuselage to the cockpit’s rear. The control surfaces, though diminutive, afford the fighter additional lift and aid maneuverability, particularly at low air speeds.

To give the Su-33 a smaller footprint when parked, the airplane’s wingtips fold upward, a boon to parking and storage.

The MiG-29K is, in essence, a Su-33 rival, though between the two aircraft, the Su-33 is more capable: it has a greater combat flight radius, can carry more ordinance than the MiG, and can stay on station for more extended periods. It is, in short, the superior aircraft.

One of the Su-33’s significant shortcomings is the airplane’s size which is noticeably larger than the MiG-29K. Given the size difference between the two aircraft, Russia’s only aircraft carrier, the troubled Admiral Kuznetsov, can operate with more MiGs than Sukhois.

Though the Su-33 is outwardly a capable airplane, it has been produced in surprisingly small numbers: experts place the number of Su-33s in Russian naval service at just thirty-five.

A modernization process is underway to upgrade Russia’s small Su-33 fleet and rectify the issues that could not be addressed due to insufficient funds: principally upgrading the airplane’s engines with a higher-performance alternative.

Though a reasonably capable naval fighter on paper, the Su-33 is hampered by its engines and insufficient production numbers. Given the state of Russia’s navy and that they sail just a single, unreliable aircraft carrier, the Su-33 may not stay in service for much longer.