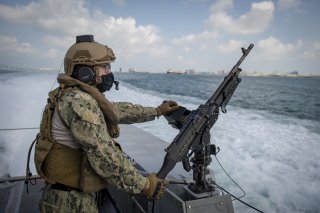 As of this week, nearly the entire crew of the USS Theodore Roosevelt (CVN-71) has been tested for coronavirus, and there have been a total of 710 total positive and 3,872 negative results, the U.S. Navy reported. A significant number of those who tested positive have displayed no symptoms.

The fact that many sailors could be carriers of the disease without knowing it has been a major concern for the Navy.

As of Wednesday, there were currently cases of COVID-19 on 26 U.S. Navy warships, and as a precautionary move those ships are now in port or at maintenance yards. CNN reported that the Navy has not released the names of the individual ships impacted, or even the exact number of cases. Department of Defense (DoD) policy states that such a public announcement could risk the operational security of those ships.

The Navy has also announced that there are now currently 90 ships at sea with no reported cases.

To help stop the further spread of the highly infectious coronavirus, the Navy is now working with the Centers for Disease Control and Prevention (CDC) to conduct a full investigation of the outbreak of COVID-19 aboard the USS Theodore Roosevelt. This will look into the origin of the outbreak and be used to determine how it spread rapidly onboard the ship.

"An outbreak investigation is a standard part of our public health response for an infectious disease event aboard one of our ships," warned Rear Adm. Bruce Gillingham, U.S. Navy Surgeon General last Friday.

"This is a stealthy virus in many ways and this outbreak investigation is an important medical weapon to understand its behavior so that we can better protect the crew, their shipmates on other vessels, and ultimately the nation," he added.

As part of the investigation, the Navy is asking volunteers to complete a short survey and provide two specimens – nasal swabs and blood – for laboratory testing. The Navy is hoping to get 1,000 volunteers for representative sampling of the crew.

While the USS Theodore Roosevelt remains the hardest-hit U.S. Navy warship from the coronavirus, it isn't the only aircraft carrier to be sidelined from the disease. Across the world, the French flagship Charles de Gaulle was forced to return to its homeport of Toulon after nearly 60% of the crew tested positive for COVID-19. That has also led to questions, finger-pointing, and investigations.

While only one of the infected sailors required intensive car, about half the crew remains asymptomatic. This has made it difficult to track infections without tests. Due to the abruptness of the outbreak, there have been accusations that the French Navy downplayed or even mishandled the crisis, reported The New York Times.

"Mistakes were made, of course, but out of ignorance of the virus, and that is not specific to the aircraft carrier," Captain Éric Lavault, a French Navy spokesman, told the paper of record.

Military officials agree that restrictions for the crew may have been too lax, as the crew was allowed to go ashore in mid-March in the port of Brest, where sailors met with the family and visited restaurants and shops. That came just before France went into full lockdown.

With such concerns over COVID-19, the U.S. Navy has responded by quarantining the crew of the USS Nimitz (CVN-68) as the nuclear-powered carrier readies for its deployment. At the same time the Navy has taken the extreme decision to extend the deployment of the USS Harry S. Truman (CVN-75) and the rest of its carrier strike group (CSG), until the Nimitz is deployed. Carrier Strike Group 8 has conducted two deployments in a row without a major maintenance period – but that has been necessary to keep from sidelining another U.S. Navy carrier.