Superpower or Not? Is America In Decline? Here's What An Expert Told Us. 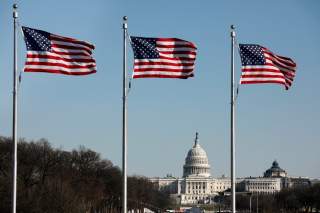 Is America growing weaker? It depends on what you mean by “weak,” Dan Nexon, an associate professor at Georgetown University, wrote in a revealing blog post on Jan. 18, 2020.

“The debate over American relative decline can get pretty complicated,” wrote Nexon, whose book Exit from Hegemony: the Unravelling of the American Global Order is due from Oxford University Press in 2020.

“You can’t really sum the components of state power into some kind of aggregate, ‘total power’ measure,” Nexon wrote at the blog Lawyers, Guns and Money. “Even if you could, it’s not clear how you would create a metric that includes the different instruments associated with economic, military, diplomatic and other capabilities.”

Some experts weigh national power by comparing gross domestic product. In absolute GDP terms, the United States with its $22-trillion economy still by far is the world’s most powerful country. Number-two China commands a $15-trillion economy. Both the U.S. and Chinese economies are growing at roughly similar rates, making it unlikely that China any time soon will overtake America in unadjusted GDP.

But there’s another way of calculating GDP, which is to adjust it for the strength of a country’s currency inside its own borders, also known as “purchasing price parity” or PPP. ‘Whether you use nominal or PPP gives a rather different picture of the largest players in the global economy,” Nexon explained.

With its lower standard of living and cheap labor, PPP adjustments for China yield a $29-trillion economy, which is $7 trillion more than America’s own PPP-adjusted GDP. But PPP adjustments are deceiving, in particular for countries that import costly goods. China still relies on imports of machinery, engines, vehicles, aircraft and oil -- things for which it cannot pay domestic rates.

“GDP is an imperfect proxy for global economic power,” Nexon wrote. “Global economic influence depends not simply on how rich a country is, but many other factors, including the value of its consumer market, how much money its government has to ‘throw around’ in international affairs and asymmetries in influence generated by patterns in interdependence.”

There are other ways of calculating national power, Nexon explained. But “military spending is, if anything, a more problematic proxy,” he added. “Military spending is, in some ways, less transparent. It is also a pretty indirect measure of the strength of the military instruments that a state has at its potential. The technological characteristics of those instruments, the combat readiness of military forces, how specific portfolios of capabilities interact, logistics and a host of other factors shape military power. Military power also has a symbolic dimension – which matters, given that a lot of the power-political ‘work’ done by military instruments has little to do with actual combat operations.”

Given those caveats, does China’s rise as a military power mean that the United States is weaker in comparison? Nexon is skeptical.

“China is only at the very beginning of its effort to develop the political infrastructure for power-projection, and it is capable of engaging in some limited overseas operations,” he wrote. “When it comes to conventional military strength, we simply don’t know how effective China would be at blocking U.S. power-projection into East Asia in the event of a military conflict. What we do know is that China is better positioned to do so than it was 10 years ago, and that it continues to improve its war-fighting capabilities.”

“I do not doubt that the United States is capable of remaining – and likely to remain – a global power,” Nexon concluded. “It may have many years left as the only truly worldwide military powerhouse.”

But there are other dimensions of global leadership. The United States under Pres. Donald Trump has lost influence as Trump attacks long-term allies and demonizes countries he has described as “shit-holes” and exporters of criminals.

In surrendering America’s soft power, Trump increasingly relies on threats of military force to exert influence on world events. But the militarization of influence can result in a fragile kind of power, as the Soviet Union learned during the Cold War. That could be the greatest risk the United States faces as it seeks to preserve its power in the world.

“The combination of declining non-military instruments of leadership and continuing military dominance could prove particularly toxic,” Nexon wrote, “as it will leave the United States more dependent on threats to use force – and the actual use of force – to pursue its interests.”