To Survive Enemy Missiles, the British Landing Force Must Evolve 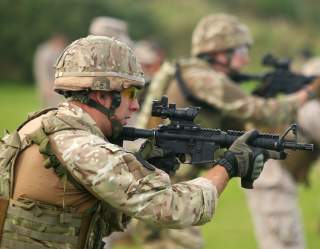 Into this dichotomy sails the Royal Navy’s small beach-landing fleet. The challenge for the U.K. amphibious force -- currently with five assault ships plus landing craft, helicopters and marines -- is to evolve for the world’s dangerous littorals, all without costing a lot more money.

One possible solution to this problem is a mixed fleet of traditional assault ships working alongside commercial-style vessels. That’s the same solution the U.S. Navy is considering as it mulls the littorals dilemma.

“On the one hand, the clustering of states’ economic assets and population centers in littoral areas will make the ability for the joint force to impact the littoral ever-more critical over the course of the coming decades,” the Royal United Services Institute explained in a November 2019 study.

“Simultaneously, however, the maturation of precision-strike capabilities and [surveillance] systems that enable them, along with the proliferation of technology associated with the concept of anti-access area denial, will make traditional amphibious assaults and ship-to-objective maneuvers ever-more difficult,” RUSI continued. “As such, the joint force needs to affect the littoral to prevail, but will find approaching the littoral increasingly perilous.”

New amphibious equipment and “littoral strike” concepts are in order, RUSI recommended. “The concepts which guide littoral strike must be conceptually focused on enabling access for the joint force to exploit, and thereby achieve strategic effect.”

For this force to survive within range of enemy forces’ anti-ship missiles, the navy should add more cheaper ships to the mix and spread out the landing forces, RUSI recommended. “Operating in littoral regions will require the current exclusive emphasis on big-deck assault ships to be modified in favor of a scalable force capable of operating within an opponent’s anti-access bubble in order to degrade it and thus enable the insertion of heavier follow-on forces.”

The Royal Navy already has begun to acquire similar ships, which it would need in order to form amphibious flotillas similar to Draa’s proposed littoral combat groups.

Gavin Williamson, the U.K. defense secretary at the time, in February 2019 announced the planned purchase of two “littoral strike ships.” The Royal Navy in August 2019 released concept art confirming the basic layout of the vessels.

Being modified merchant vessels, the littoral strike ships likely will lack robustness compared to purpose-built warships. But the British, like the Americans before them, concluded that these ships are better than nothing as the two navies sail into a dangerous new era of amphibious warfare.