Suspend Syria and Russia from the WHO 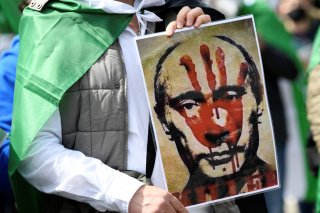 An artillery barrage tore into Al-Shifa hospital in northwest Syria on Saturday morning. The attack killed two healthcare providers, and the hospital is temporarily out of service. Yet this war crime is different from hundreds of others perpetrated by the Damascus regime and its sponsors in Moscow and Tehran, because it was just two weeks ago that the members of the World Health Organization elected Syria to a three-year term on the agency’s Executive Board, granting a leadership role in global health policy to a regime that has shown unmatched contempt for the WHO’s commitment to health care “as a fundamental right for every human being.” Russia won a seat on the Executive Board last year, despite detailed evidence that its pilots have made regular bombing runs against Syrian hospitals.

Western governments often respond with resignation when UN agencies select the worst of the worst human-rights violators to serve in leadership roles. After all, the UN system insists on equal treatment for all sovereign governments, regardless of how they treat their own population. However, the WHO constitution actually provides a mechanism for holding member states accountable. According to Article 7, “If a Member fails to meet its financial obligations to the Organization or in other exceptional circumstances, the Health Assembly may, on such conditions as it thinks proper, suspend the voting privileges and services to which a Member is entitled.”

The Healthy Assembly is the annual gathering in Geneva of representatives from all 194 member states. To date, it has never suspended one of its members. Yet earlier this year, the Organization for the Prohibition of Chemical Weapons (OPCW), another member of the UN family, made history by voting to strip the Bashar al-Assad regime of its voting rights and other privileges. Repeated OPCW investigations made clear that Assad continued to use chemical weapons and conceal his weapons program long after nominally complying with the Chemical Weapons Convention in 2013.

The United States and France led the campaign that moved the OPCW to action. The U.S. effort was bipartisan, beginning under the Trump administration and continuing with equal force after Joe Biden took office. Moscow did its best to sow disinformation, including conspiracy theories that the OPCW fabricated the evidence of chemical weapons use in Syria. Nonetheless, eighty-seven members voted for suspension, with only fourteen opposed and thirty-four abstaining, more than the two-thirds necessary for the motion to pass.

This vote was the culmination of a multi-year diplomatic and fact-finding process. In light of probable Russian and Chinese obstruction, patience is always necessary. There is also an effort underway to hold Russia accountable for its use of chemical weapons, specifically the military-grade nerve agent Novichok, to poison Putin’s adversaries, such as anti-corruption activist and opposition leader Alexei Navalny. Not surprisingly, OPCW member states are far more hesitant to antagonize a nuclear superpower and permanent member of the UN Security Council. Yet there is no Russian veto at the OPCW, so the campaign ought to continue until Moscow is held to account.

The situation at the WHO is more complicated since Washington’s natural priority there is to ensure a credible investigation of the coronavirus pandemic’s origins. So far, the agency’s work has fallen far short of that standard, yet the urgency has grown following Biden’s announcement that the U.S. intelligence community considers likely the possibility that the pandemic began at a Chinese virology lab, though it considers the scenario of direct animal-to-human transmission no less probable.

Spearheading a second major initiative at the WHO may tax the administration’s diplomatic resources. The White House should push first for the suspension of Damascus, since many more governments will be prepared to vote against a pariah. Once that precedent has been set, the focus should shift to Russia.

It is reasonable to ask why the United States should invest so much effort in uphill battles at international organizations. The answer is that they are becoming crucial battlegrounds in the new era of great-power competition. China especially, but also Russia, has been ahead of the curve in realizing that it can shape the rules of world politics by stacking the leadership of UN agencies with its preferred candidates.

Meanwhile, two schools of mistaken thought have limited Washington’s effectiveness in such forums. The first is the call to stop wasting time and money on engagement with agencies rigged to favor various dictatorships. The extent of Chinese influence at the WHO has shown why leaving the playing field to Beijing is a serious mistake.

On the other side, there is a belief that engagement is the key to reform. To be sure, reform is unlikely without engagement, yet, in practice, this approach has a tendency to degenerate into engagement for engagement’s sake. In a bid to demonstrate good faith, the practitioners of this approach shy away from calling out the flaws of UN agencies and pushing hard for reform.

When it comes to the WHO, Secretary of State Antony Blinken testified at his confirmation hearings that it is a “very imperfect organization in need of reform,” yet withdrawing from the organization, as former President Donald Trump wanted, would undermine such efforts. Yet the new administration has been tepid at best in efforts to challenge the WHO status quo.

The bipartisan path forward should proceed from the premise that engagement is essential precisely because the WHO and other multilateral organizations are strategic grounds in the struggle against U.S. adversaries. Biden’s interim national security strategy hints as much but shies away from saying it openly. The document warns of an “authoritarian agenda” for manipulating the UN system, then adds, “In a world of deepening rivalry, we will not cede this vital terrain.”

A push to suspend Syria and Russia from the WHO will require substantial effort, but the administration should not see it as a burden. Rather, it is part and parcel of a necessary campaign to shape the multilateral playing field by targeting the real opponents of reform.

David Adesnik is a senior fellow and director of research at the Foundation for Defense of Democracies, a non-partisan national security research institute in Washington, DC. Follow him on Twitter @Adesnik