Switzerland's F-35 Fleet May Be Built in Italy 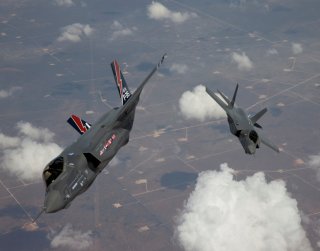 “The exchange will focus on whether it will be possible to have a part of the future F-35-A fleet of the Swiss Air Force produced in Cameri, Italy.”

The F-35 plant in Cameri is instrumental to European security and the F-35’s production. The production line in Cameri represents “one of two production lines of the F-35 outside of the USA and the only one in Europe.”

The Italian Air Force and the Italian Navy operate F-35A and F-35B aircraft. In addition, F-35A fighters are also produced for the Dutch Air Force in Cameri.

Despite the perception, Switzerland’s F-35 acquisition was not guaranteed. The country initially pitted several aircraft against each other, weighing the pros and cons of each platform, though the United States’ F-35 aircraft was the only one  with stealth capabilities.

Switzerland currently flies the F/A-18 Hornet, an American-designed airplane that is flown by the U.S. Navy and is carrier-capable. Though the multirole fighter was a capable aircraft when introduced into service in the United States in the early 1980s, it has become slightly outdated.

One idea Switzerland had considered was replacing its legacy Hornet fighter jets with the more capable F/A-18 Super Hornet. Though the number designation and name are quite similar, the Super Hornet is a larger aircraft with advantages in payload and range. Still, it is firmly within the fourth-generation aircraft camp and is therefore not a stealth fighter like the F-35.

The F-35 has proven to be a popular choice in Europe. In addition to Italy and the United Kingdom, Finland, Belgium, Denmark, Norway, the Netherlands, Poland, and Germany have all decided to adopt the F-35 fighter, largely on the merits of its stealth capabilities.

Though the F-35 beat out the competition, Swiss activists unhappy with the decision to purchase an American aircraft nearly shot down the decision in a kind of recall referendum.

Still, the F-35’s advantages are clear, and the Swiss defense forces decided that the airplane’s stealth capabilities make it superior to the competition.