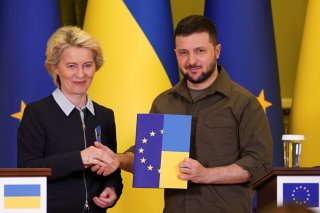 The European Union is set to grant candidate status to Ukraine, a symbolic win for Kyiv as Russia’s invasion enters its fourth month.

The transition from applicant to candidate typically takes years, but EU leadership has fast-tracked Kyiv in light of the ongoing war in Ukraine. “Ukraine is going through hell for a simple reason: its desire to join the EU. The EU Commission answered this desire explicitly,” tweeted EU Commission president Ursula von der Leyen. “Our opinion acknowledges the immense progress that Ukrainian democracy has achieved since the Maidan protests of 2014.”

EU membership is a lengthy and complex process requiring aspiring countries to comply with all EU laws and regulations, maintain a “stable democracy and the rule of law,” and support a functioning market economy. French president Emmanuel Macron, who traveled to Kyiv earlier this month along with German chancellor Olaf Scholz and Italian prime minister Mario Draghi to express support for the decision to grant Ukraine candidate status, previously said that Ukraine’s EU accession could take “several decades” and will require the EU to operate on the basis of “lower standards of membership.” EU officials observed as recently as the summer of 2021 that “grand corruption and state capture are still widespread in Ukraine” and that the rule of law is under continued threat by “oligarchs and vested interests.”

Portuguese prime minister Antonio Costa echoed Macron’s concerns, telling the Financial Times that the decision to confer candidate status to Ukraine risks creating “false expectations” and could expose further divisions within the EU at a time when it should be projecting unity in its practical support for Kyiv.

Ukrainian president Volodymyr Zelenskyy welcomed the upcoming decision on Wednesday, saying, “This is like going into the light from the darkness.”

“I do believe that all 27 European Union countries will support our candidate status,” Zelenskyy said. All twenty-seven EU member states would need to approve Ukraine’s membership as part of the accession process. Hungary, which maintains a tense relationship with the current Ukrainian leadership, signaled earlier this year that it does not intend to block Ukraine’s EU aspirations.

Ukraine is one of several eastern European countries vying for EU membership. Moldova, which is also facing territorial challenges with the pro-Russian breakaway region of Transnistria, is widely expected to be granted candidate status along with Ukraine. The EU Commission is also expected to grant Georgia—which submitted its accession application within one week of Russia’s invasion—“the European perspective,” a baseline recognition that falls below official candidate status. The decision, reportedly spurred by Tbilisi’s insufficient progress in implementing political, judicial, and economic reforms, has sparked a wave of protests across the country.