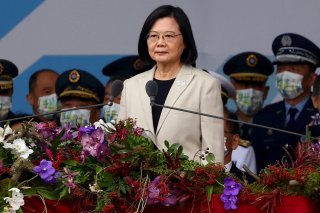 President Tsai Ing-wen of Taiwan claimed on Monday that there was a “genuine threat” the island could be invaded by mainland China, which has repeatedly vowed to assume control over Taipei by any means necessary and has implemented a buildup of its military in recent years.

In an interview with former U.S. deputy national security advisor Ben Rhodes published in The Atlantic on Monday, Tsai claimed that Taiwanese lawmakers and the public “need to get ourselves ready” for a possible invasion, describing it as a “real … thing [that] could happen to us.”

“There is a genuine threat out there,” she added. “It’s not hype.” The People’s Liberation Army (PLA) is far larger than the Taiwanese army and is far stronger in terms of equipment. In an attempt to even the balance, Tsai’s government has increased funding to Taipei’s defense budget, increasing its funding to $19 billion, a 13.9 percent increase in FY2023 over FY2022. Taiwan’s main aim in a future military conflict is to make an invasion from the mainland as costly

and painful as possible, according to Rhodes. “If the [PLA] wants to do something drastic, Xi has to weigh the costs,” Tsai said, referring to Chinese leader Xi Jinping. “He has to think twice.” She compared the situation in Taiwan to that in Ukraine, where Western support for the Ukrainian military has proved critical for its ongoing resistance against Russia’s invasion since February.

Although the government of mainland China has asserted its rightful ownership of Taiwan since its founding in 1949, it has never actually exercised authority over the island. In 1949, following the Kuomintang (KMT) party’s loss to Chinese Communist Party (CCP) leader Mao Zedong in the country’s civil war, the remnants of the KMT under Chiang Kai-Shek retreated to Taiwan, maintaining the Republic of China on the island long after its eradication from the mainland.

Since 1949, the CCP-governed People’s Republic of China on the mainland has insisted that other nations recognize it as the only legitimate government of China as a precondition for diplomatic relations; only a handful of nations have not accepted this principle. Xi vowed during the CCP’s recent 20th National Congress that his government would never renounce the use of force to gain control over Taipei although he insisted that military action would be used as a last resort after all diplomatic avenues had failed.

The United States, which formally established relations with Beijing in 1979, has remained ambiguous about its commitment to the One China policy and maintains informal diplomatic links with Taipei. Washington has also remained ambiguous on whether it would defend Taiwan, a major non-NATO ally since 2003, from a Chinese attack. President Joe Biden has repeatedly claimed that the United States would help defend Taiwan in the event of a Chinese invasion although the White House has walked these claims back each time, insisting that U.S. policy toward China had not changed.