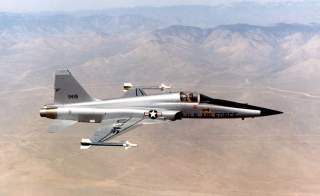 The Taiwanese government reportedly is reverse-engineering old, U.S.-made jet engines for use on high-speed cruise missiles.

The Taiwanese air force operated more than 300 F-5s before replacing them with American-made F-16s, French Mirage 2000s and locally-built F-CKs, in theory leaving the country with a large stock of excess J85s.

A Taiwanese J85 clone could power new cruise missile types. According to local media, the same Chinese Academy of Sciences that's tearing down the J85 is also developing a cruise missile with a 750-mile range.

Taiwan deploys land-attack and anti-ship missiles in order to defend against Chinese invasion forces and the ports, air bases and missile sites that support them. At its widest, the Taiwan strait that separates China and Taiwan is just 140 miles across.

If Taiwan completes development of its new 750-mile-range munition, it wouldn't be the first time the J85 has powered a missile. In fact, General Electric developed the J85 for use on the U.S. Air Force's Quail decoy drone.

The Quail in essence was an unarmed cruise missile.

The Air Force acquired the Quail for its force of B-52 strategic bombers. The idea was for the B-52s to launch Quails in order to distract enemy air defenses while the nuclear-armed bombers made their final runs toward their targets.

Capable of a top speed just below Mach one thanks to its J85 motor, a Quail was as fast as a B-52 is. The Air Force deployed Quails between 1960 and 1978, at which time long-range atomic attack missiles allowed B-52s to attack from beyond the range of enemy air defenses.

Media reporting aside, Taipei has been fairly quiet about its missile programs. "Taiwan has pursued these programs discreetly to avoid raising concern in the United States or the People’s Republic," the Washington, D.C.-based Center for Strategic and International Studies explained.

"As most countries do not maintain official diplomatic relations with Taiwan, it has sometimes been challenging for Taiwan to acquire more advanced weapon systems from the international market," CSIS continued. "Consequently, the island-nation has often opted to domestically develop newer missile technology, which has spawned a robust Taiwanese defense industry."

But for all its robustness, Taiwanese industry apparently still benefits from tearing down a 60-year-old engine design.

To be fair, Taiwan isn't the only country that reverse-engineers military technology. Among other major systems, China copied the old aircraft carrier it acquired from Ukraine in the late 1990s as well as the Su-27 fighter it bought from Russia around the same time.

Taiwanese officials reportedly considered reverse-engineering the diesel-powered submarines the country acquired from The Netherlands. Instead, Taiwan has received approval from the U.S. government to acquire American submarine technology.

It's unclear whether Washington might respond to Taipei's reverse-engineering of the J-85 with sanctions or other measures.