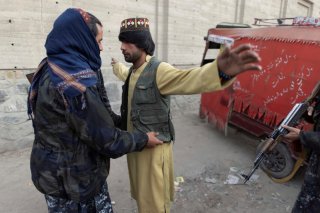 Haibatullah Akhundzada, the Emir of the Taliban’s “Islamic Emirate of Afghanistan,” warned the group on Thursday that its rank and file might have been penetrated by non-Taliban factions “working against the will of the government.”

The statement was circulated on official Taliban social media accounts, and on the group’s website, on Thursday. It was not immediately clear which groups it was referring to, although it is known that members of the Islamic State terror group’s “Khorasan Province” affiliate, or ISIS-K, have attempted to infiltrate the group. Earlier infiltration attempts led Mullah Mohammad Yaqoob, a son of late Taliban leader Mullah Omar and the country’s new Defense Minister, to issue an audio message claiming that “bad and corrupt people [...] want to join us [...] to fulfill their own interest.” Yaqoob ominously warned that those who attempted to infiltrate the group would be caught and dealt with in an unspecified manner.

After its successful takeover of Afghanistan in mid-August, the Taliban has dealt with a steadily increasing insurgency conducted by ISIS-K, which has launched a series of sophisticated bombing attacks against civilian targets. Two attacks targeted crowded Shi’a mosques in Kandahar and Kunduz, two major Afghan cities, and a third attack on Tuesday targeted a military hospital in Kabul, killing at least nineteen Afghan civilians.

Although the Taliban has maintained near-total power in the country since August, and the ISIS-K insurgents are thought to number only a few thousand, it is widely suspected that some of their members, possibly including the group’s shadowy leader, are present in the Taliban’s ranks. In some cases, the terror group may have secured defections among extremist members of the Taliban’s rank and file, frustrated by the group’s newfound pragmatism in statecraft.

While the Taliban and ISIS share many religious tenets, the Taliban has indicated it intends to make peace with the rest of the world and rule Afghanistan as a sovereign state, rather than a millenarian movement attempting to resurrect an Islamic caliphate and conquer the world, as ISIS ideology has historically dictated.

As the Taliban has publicly celebrated its ascent to power, and many of its longtime leaders have formally taken up positions in the country’s new government, Akhundzada has remained secluded from public view, issuing statements but avoiding public engagements—although he allegedly visited a religious school in Kandahar earlier in the week, defying rumors of his death.