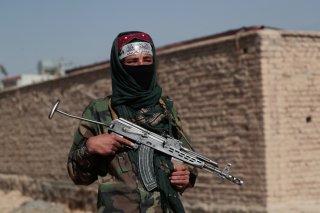 The Institute for the Study of War (ISW), a military research think tank in Washington, DC, warned on Wednesday that the Islamic State’s “Khorasan Province” (ISIS-K) affiliate branch in Afghanistan had rapidly expanded the scope of its operations following the chaotic U.S. withdrawal from the country in August.

The group noted in its report that ISIS-K militants had stepped up their attacks in the provinces of Nangarhar and Kunar, in addition to escalating a bombing campaign targeting Shi’a mosques. Two high-profile attacks in this campaign targeted mosques in the northern city of Kunduz and the southern city of Kandahar—attacks which the Taliban government, which promised after its takeover to provide security for all the nation’s citizens, failed to prevent.

While ISIS-K and the Taliban share obvious ideological similarities, the two groups have emerged as major enemies in Afghanistan, and ISIS-K has acted to undermine the Taliban’s legitimacy among Sunni Afghans, according to the report. The group has weakened Taliban authority through the use of “frequent kinetic attacks,” most commonly in the form of improvised explosive device (IED) roadside attacks that the Taliban ironically perfected against U.S. and Afghan troops during its twenty-year war.

These attacks frequently target Taliban fighters and vehicles, but they have also been conducted against physical infrastructure in the country, helping to prolong Afghanistan’s economic crisis and prevent the Taliban from gaining economically from the end of the war. The report highlighted attacks in June and July 2021 that ISIS-K had destroyed electricity pylons in the country’s Parwan province, threatening Kabul’s already-tenuous energy supply. These attacks, the report noted, mirrored similar attacks that had earlier taken place in Jalalabad and were followed by an October 21 explosion that briefly shut down Kabul’s power grid.

The ISW report warned that Taliban reprisals for these attacks, which often involve extrajudicial killings of suspected ISIS-K militants, could strengthen the group rather than weaken it, as news of Taliban atrocities could help it to recruit more members for its ranks. The group has also gained from the defections of Taliban affiliate groups, according to the report.

Finally, the ISW warned that the pragmatism of Taliban senior leadership, including through amnesty for former members of the Afghan government and the reopening of some girls’ schools, could alienate the group’s rank and file, which the report noted was “consistently reported to be more radical than the Taliban leadership.”