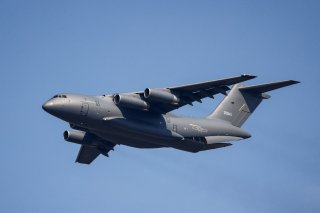 When it comes to a quick assessment of Chinese air power, one might wonder if the People's Liberation Army Air Force (PLAAF) has enough fifth-generation fighter jets to achieve air superiority in support of an amphibious attack on Taiwan. In addition, China may not have enough aerial refuelers to project air power across continents or even sustain long-dwell fighter jet attack campaigns over Taiwan, given that J-20s would need to launch from land.

Perhaps recognizing this potential deficit and the absence of carrier-launched J-31, the Chinese Air Force is quickly moving to expand its fleet of air-to-air refueling aircraft. This may also be an effort to close a visible tanker deficit with the United States and fully project global air power.

According to Global Firepower, the United States operates as many as 625 tanker aircraft, whereas China is listed as only having three. This lack of tankers would limit or even imperil any Chinese effort to launch a large-scale cross-continental air campaign.

China already has fewer fifth-generation aircraft than the United States, NATO, and Pacific allies. The absence of tankers makes it very difficult for Chinese fighter jets, with a likely combat radius of 300 to 500 miles, to travel thousands of miles across a continent or ocean area.

China can still easily reach Japan, Taiwan, and possibly Australia, India, and parts of Southeast Asia. However, a cross-continental air attack is likely out of reach. There are a few things China is doing quickly to address this deficit. The PLAAF is developing a new tanker variant of its C-130 and C-17-like Y-20 Cargo plane.

“The PLAAF is developing the Y-20U, a new tanker variant of its large Y-20 heavy-lift transport, which will enable the PLAAF to significantly expand its tanker fleet and improve its power,” the Pentagon's 2021 “Report on Military and Security Developments involving the People’s Republic of China” states.

China may be accelerating the construction of these Y-20 tankers to align with its much-discussed evolving plan to achieve global domination by 2049. Should the attack ranges of its fighter jets and bombers, such as the new H-20, be able to double their range, it opens up an entirely new mission envelope for the PLAAF.

This opens up an entirely new sphere of attack options for China. Nonetheless, the lack of tankers is likely one of many reasons why China is vigorously expanding its global footprint and influence to include more locations in the Middle East and Africa. Much of China’s incursions into Africa, apart from the emergence of a military base in Djibouti, are economic or business-oriented. Any ability to base aircraft in parts of Northern Africa significantly improves the PLAAF’s ability to reach the European continent for potential air attacks.

This is highly significant because, without a larger tanker fleet or substantial forward positioning, China would be ill-equipped to handle any air confrontation on a large scale beyond its immediate region.

At the same time, a lack of tankers does not limit China’s ability to attack Taiwan or possibly even Japan. Japan, however, can be as far as 1,000 miles off the coast from parts of mainland China, depending upon the take-off point. Therefore refueling, or amphibious forces, might be needed should China need to launch an invasion of Japan and give its fighter jets reach and dwell time.

Along these lines, a multifunctional Chinese Y-20 variant could make an enormous difference regarding amphibious attacks. Not only could the large cargo aircraft deliver supplies, ground troops, or weapons to an amphibious landing area should a beachhead be secured, but it could enable fighter aircraft to help an amphibious attack pursue air superiority. China is quickly expanding its amphibious assault capacity with new ships and drones. Therefore, additional, sustained fifth-generation airpower in support of amphibious assaults could bring a new dimension to Chinese threats to Taiwan and other areas.