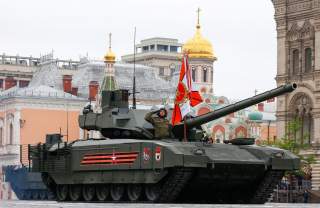 Key point: Russia wants to make money while showing off its weapon systems.

While Russia’s next generation Armata has not yet officially entered service, buzz has already been created on what countries other than Russia might field it.

In 2018, Russians are no stranger to cooperative weapons development (as seen in the Brahmos missile) and even offering to export products before they are finished (as seen with the Su-57).

What countries might field the Armata in the future? Here is a few ideas:

India is looking to be the primary export partner for the T-14 Armata, with the Armata fulfilling the requirements for India’s FRCV open contract.

Other tanks that could compete against the Armata within the FRCV contract requirements are the Korean K2 Black Panther and Ukrainian BM Oplot. Most current Western tanks like the Leopard 2A7 and M1A2 Abrams are too heavy for Indian terrain.

The Armata also faces domestic opposition in the Arjun Mk. 2, but it’s unsure if the latest version of the Arjun can overcome the poor reputation and controversies of its predecessor.

Despite its own burgeoning arms industry, China continues to acquire advanced Russian military equipment such as the Su-35S and the S-400.

In doing so, it’s continuing a relationship that began in the 1990s in which China buys expensive and close to cutting edge equipment from Russia then incorporates its features into its own products, as it has done with the J-11B and HQ-9.

As such, China will likely try to buy Armatas, if only in limited numbers to evaluate them, adopt what technology they think is good, and perhaps produce their competing version of the Armata for export.

Algeria has a long standing defense relationship with Russia and fields some of the most advanced Russian weapons in its military. They operate T-90s, S-50, and Su-30MKAs, which are an advanced variant of the Su-30.

They even have bought more recent Russian developments such as versions of the BMPT infantry support tank and Yak-130 fighter trainer.

Russia appears to trust them as a partner in advanced weapons development programs, and has asked them to be partners in the PAK FA (Su-57) project and appears to be willing to export the advanced fighter to them.

Algeria acquiring Armatas would ensure their supremacy as one of the most powerful militaries in their region and the Maghreb, and even Africa. However, given the large number of already advanced (for the region) T-90s they field, it’s unlikely Algeria will acquire more than a handful of Armatas due to the expensive cost.

Similar to Algeria, Egypt has gravitated towards purchasing Russian equipment recently, including T-90s and MiG-35s. Interestingly, both Egypt and Iraq have shifted from using U.S.-made export versions of the Abrams back to Russian-manufactured armor in their recent T-90 purchases.

For Egypt, this ends an almost thirty year relationship with the United States, in which they first bought M60 Pattons and then M1A1 export Abrams. Despite the recent pivot towards Russian products, Russia appears to trust Egypt and has offered the Su-57 to export to them as well.

As such, Egypt is a likely Armata export customer. That being said, they’re unlikely to procure them in the near future. The Egyptian Army placed an order for T-90s to augment their Abrams fleet in 2017, so they are unlikely to make another order for modern tanks for quite some time.

Similar to Algeria and Egypt, the United Arab Emirates has been cited as a potential export customer for the advanced Su-57 fighter, indicating a Russian willingness to cooperate on military and technical affairs.

Russia has been attempting to align the UAE’s armament procurement towards it more recently, offering it access to the Russian GLONASS GPS-equivalent satellite network.

With regards to armor, the UAE fields both Russian BMP-3 tracked infantry fighting vehicles and Ukrainian BTR-3 wheeled armored personnel carriers. Its entire tank fleet is comprised of French LeClerc Main Battle Tanks, which are of a fairly advanced type and which have been receiving considerable upgrades since being adopted.

According to this French blog, the type has performed satisfactorily in Yemen, suffering minimal losses.

Despite the strategic successes of the LeClerc, it was noted that the tank was penetrated on the frontal arc by an old Konkurs anti-tank guided missile. The projectile killed the driver and wounded the tank commander.

As a result, the UAE looked into upgrade kits for the LeClerc, including soft and hard-kill systems. However if France is unable to deliver or if the Armata’s solution to these problems is evaluated to be superior, the UAE might find itself procuring the Armata in the near future.