These French-Made Pakistani Missiles Could Sink an Aircraft Carrier 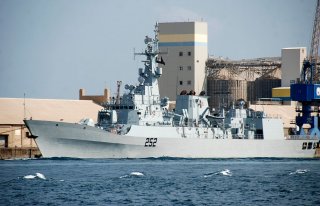 In the event of a naval war between Pakistan and India, the Pakistan Navy could use these missiles to strike India’s only aircraft carrier.

The original Exocet missile and its variants are Pakistan’s primary anti-ship missile—and it is difficult for ships to defend against. The Exocet was developed in France in the late 1960s as a short-range anti-ship missile capable of being fired from air, land, and sea.

The Exocet was designed to be difficult both to intercept and to detect—the missile has a very low trajectory. After launch, it stays low near the surface of the ocean, both to avoid detection by enemy radar, avoid visual contact, and prevent interception by close-in weapon systems.

Though the production of the original Exocet variant ended in 2002, Pakistan is believed to still have a number of the anti-ship missiles stocked. Its range was somewhat limited, just forty kilometers, or about twenty-five miles and was intended to be ship launched.

The SM39 is the only submarine-launched variant of the Exocet family and can be launched from Pakistan’s Agosta-class submarines, also purchased from France and built with French assistance.

The SM39 is ideal for submarines with an insufficient height to launch missiles vertically. The SM39 is launched from torpedo tubes in a watertight container that then ejects the missile into the air upon contact with the surface. The Pakistan Navy test-fired the SM39 in 2001 in the Arabian Sea.

The AM39 update included navigational improvements and is air-launched, giving helicopters and aircraft at sea an anti-ship capability. An evasive maneuvering capability was also added to the system, decreasing the effectiveness of an opponent’s anti-missile systems.

By increasing the length of the MM40, Pakistan was able to add more propellant to the missile, thereby increasing its range. In addition to terminal-phase evasive maneuvers, the MM40 is capable of skimming the surface of the ocean—only two to three meters above the surface, or about six to ten feet, helping the missile to avoid radar detection and interception.

In the event of a war with India, it could be assumed that Pakistan would target India’s INS Vikramaditya, India’s only aircraft carrier.

The Vikramaditya was originally christened in the Soviet Navy as the Baku in 1987. Though purchased from Russia in 2004, a nine-year delay was caused by unanticipated refurbishments which caused the purchase price to double to over $2 billion.

However, the Vikramaditya’s does have a close-in defense system. The Vikramaditya is equipped with both Israeli-developed Barak surface-to-air missiles that can defend incoming anti-ship missiles, as well as the AK-360 close-in defense system, which is a 6-barreled 30-millimeter gun. The Barak system is in use on a number of Indian Navy ships and is theoretically an effective system. The AK-360 has been in use since the mid-1970s and is presumed to be reliable.

Still, losing the Vikramaditya would be a significant blow to the Indian Navy in both material and capability terms, as well as a significant psychological blow.