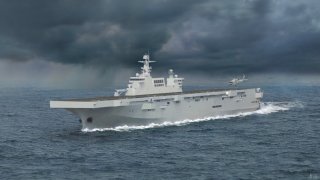 The PLAN's focus on amphibious warfare continues to heighten amid growing tensions over Taiwan, as China has been conducting amphibious assault landing drills, surface-t0-helicopter-t0-aircraft connectivity, and practicing maritime warfare maneuvers. China’s first of its new fleet of Type 075 amphibious assault ships, called the Hainan, is expanding its ability to conduct multi-domain operations, a move which clearly seems to parallel ongoing work by the Pentagon Army-Navy multi-domain task forces training in the Pacific.

The surface-to-air attack networking ability of these new Chinese amphibious assault ships is greatly strengthened by the addition of the Z-18J early warning helicopter, Z-9 anti-submarine helicopter, and Z-8C transport helicopter, according to the Chinese Communist Party-backed newspaper the Global Times.

This integrated air-surface, multi-domain tactical connectivity was recently put to the test in an end-of-the-year assessment of the new Chinese amphibious assault ship, the Global Times said. The emphasis of the exercise was to refine air-surface joint operations.

"As we practiced more over the past few months and adjusted our approach, we have now achieved a significantly higher [helicopter] sortie rate," Zhang Yupeng, commander of an aviation detachment on board the Hainan, was quoted by CCTV as saying, according to the Global Times.

Ship-to-shore amphibious landings were also featured heavily in the assessment, as the Hainan-launched air-cushion landing craft and amphibious assault vehicles to prepare for combat operations. Technological and tactical progress has now enabled the PLAN to greatly reduce the loading and sortie time for equipment being used in an amphibious assault.

China appears to have plans to build an entirely new class of these kinds of integrated amphibious vessels, as any actual “on-land” takeover of Taiwan will likely rely upon the successful execution of an amphibious landing.