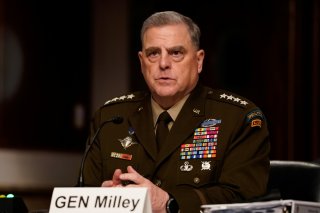 Gen. Mark Milley, the chairman of the Joint Chiefs of Staff, said during a Congressional hearing on Tuesday that the United States should build additional military bases in Eastern Europe to deter further Russian aggression in the region, although he suggested limiting their facilities and rotating troops through rather than maintaining a permanent presence.

Milley also recommended that the United States should attempt to implement a cost-sharing program with host countries in the region, including Poland and the Baltic states, all of which have requested a greater U.S. presence and indicated they would be willing to help offset the additional costs.

“My advice would be to create permanent bases but don’t permanently station [troops there], so you get the effect of permanence by rotational forces cycling through permanent bases,” Milley said. “I believe that a lot of our European allies, especially those such as the Baltics or Poland and Romania, and elsewhere—they’re very, very willing to establish permanent bases. They’ll build them, they’ll pay for them.”

Milley’s suggestion that U.S. troops be stationed in Eastern Europe on a rotational basis only was framed as a cost-saving measure, as rotating troops through a temporary deployment area is cheaper than “permanently” deploying them for several years at a time. On permanent deployments, soldiers are typically assigned permanent housing and bring their families, requiring the creation of schools and other associated infrastructure, while accommodations during a temporary rotation are more limited and therefore cheaper.

Defense Secretary Lloyd Austin concurred with Milley, although he cautioned that American attempts to establish additional bases in Eastern Europe remained a “work in progress.” He added that discussions of further U.S. deployments would be taken up at NATO’s annual summit in June.

The two generals appeared before the House Armed Services Committee to testify on the Pentagon’s 2023 budget proposal, which the Biden administration set at a record-high $813 billion—a number that has incensed lawmakers in both parties, many of whom have argued that the funds should be reallocated to social services programs or infrastructure projects with more immediate benefits to U.S. citizens.

In addition to the budget proposals, legislators questioned Milley and Austin on the ongoing Russian invasion of Ukraine, which has led to widespread international condemnation and an increasing U.S. supply of funds and military equipment to Kyiv.

NATO Secretary-General Jens Stoltenberg indicated in March that the alliance was preparing to create four additional battlegroups, or troop deployments of roughly 1,000 to 1,500 soldiers each, and station them in Hungary, Slovakia, Romania, and Bulgaria—four Eastern European countries that were formerly members of the Soviet bloc during the Cold War.