Touchpoints: How the Army Brings Emerging Tech Onto the Battlefield 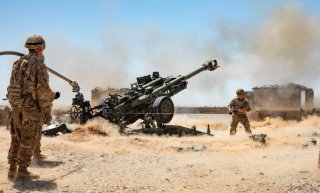 The Army’s approach to future weapons and war technologies is as clear as it is simple: putting emerging technologies in the hands of soldiers to assess how they can be integrated into a combined arms maneuver formation.

The Army calls these technologies soldier touchpoints, and they are part of an initiative launched by Army Futures Command to solidify requirements for new technologies across the acquisition community. The touchpoint applications include the use of robotic technologies, networking systems, and Long Range Precision Fires.  A number of critical innovations in these areas are requiring the service to adapt to new tactics, formations, and weapons applications, including “shaped charge” course-correcting artillery and the service’s Extended Range Cannon Artillery (ERCA) program, which more than doubles the range of standard artillery.

Maj. Gen. John Rafferty, director of the Long Range Precision Fires Cross-Functional Team, explains that soldier touchpoints are a foundational element of Army modernization. Part of the rationale is due to the recognition that combat-experienced soldiers are well suited to understand how to best use new weapons and determine their effectiveness in combat circumstances.

“One of the fundamentals of Army Futures Command is soldier-centered design,” Rafferty told the National Interest in an interview.

Longer-range artillery targeting, coupled with new dimensions of networked targeting, will massively change the scope of operations and introduce critical new tactics. Target identification can increasingly be established beyond the horizon, and AI-enabled systems allow soldiers to find new sets of targets and perform fire control and attack functions much more efficiently.

Soldier touchpoints are expected to continue to figure prominently in the development of the ERCA program, Rafferty said, because the service is now testing as many as six prototypes to prepare the system for war.

ERCA will be operating with the First Armored Division to conduct operational assessments and a year of ballistic live-fire training in a division-level setting.

“We will get a good sense of the material’s ability to withstand new kinds of stress, and we’ll be able to refit those prototypes over the next year,” Rafferty said.

This process is both elaborate and of great significance to future Army operational concepts, as much of what is learned in soldier touchpoints informs the development of new doctrine for the service.

“The second goal is to refine the operational concept. We will go in there with draft doctrine, and then take all of our notes from that year and publish the doctrine. We will put it in a Division context. It will culminate with a Combat Training Center rotation. Then we will refine the organization to determine what gaps we have. The third objective is to refine the concept of sustainment,” Rafferty said.