Tough Choices: Why The Navy Ditched Its Plans For Another Destroyer 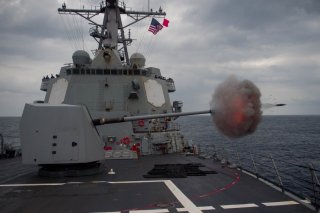 The U.S. Navy is deciding to hold off on building a second destroyer in 2022 due to competing budget demands placed upon the service by other priorities, service leaders said.

Navy leaders explain that reaching a 355-ship Navy is still very much a clear goal, but also acknowledge that a faster shipbuilding pace may be necessary to accomplish that.

Citing budget constraints and the pressing imperative to ensure continued acceleration of the Columbia-class nuclear-armed ballistic missile submarines, Navy leaders said the decision not to build a second destroyer was tough but necessary.

“With respect to the second DDG, this was clearly a hard choice with respect to what we could afford as we build the Navy for the '22 budget….The hard choice being that the Navy chose to invest the cost of the destroyer in a blended mix of readiness, modernization, and capability for the future,” Deputy Assistant Secretary of the Navy for Budget Rear Adm. John Gumbleton told reporters according to a Pentagon transcript.

However, while the Navy does have as many as twenty new destroyers at various stages of construction and development and an ambitious plan to field at least ten Flight III DDG 51 high-tech destroyers, any kind of hesitation or delay regarding destroyer construction is likely to cause concern among many in light of China’s accelerated warship buildup.

Globalfirepower.com, for example, reports in its 2021 assessments that China operates fifty destroyers, as compared to ninety U.S. Navy destroyers. This ratio is, however, changing quickly.

The PLA Navy just fielded another new Type 052D guided-missile destroyer, sending it into the South China Sea, a Chinese newspaper reported. The new destroyer joined supply ships, amphibious vessels, and other warships in a combat preparation exercise in the South China Sea.

China’s Global Times newspaper reports that the new Type 052D destroyer, the Nanning, is an upgraded variant with an “extended helicopter flight deck and a new anti-stealth radar.”

The paper goes on to specify the pace of Chinese warship construction, stating that China launched its 25th Type 052D destroyer and eighth Type 055 new stealthy large destroyer. Many more are now being built, the Global Times explains.

The pace of China’s aircraft carrier and warship expansion is potentially concerning as it does change the dynamic. For instance, while China is already known to possess a larger Navy than the U.S., the PLA Navy does at the moment operate fewer destroyers and carriers and most likely could not truly rival the U.S. Navy in terms of maritime surface warfare.  Sheer numbers of ships, the thinking goes, might prove much less impactful than larger numbers of the most capable ships such as destroyers and carriers. China’s massive expansion in this area could greatly impact the Naval balance of power.