Will the U.S. Navy Really Be Able to Meet Its 355-Ship Target? 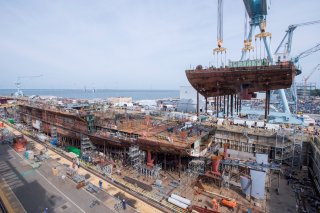 With the Navy’s 2022 budget for shipbuilding decreasing below anticipated hopes or expectations voiced by those in favor of greatly increasing the service’s overall fleet size to keep pace with China, senior Navy leaders acknowledge the service is not on track to reach its goal of a 355-ship fleet with the current pace.

The Navy budget requests eight new ships for 2022, a number which, if not adjusted in future years, does not put the service on track.

“I would tell you that eight ships a year is not going to get to 355. And so all things being equal, if you have a 300-ship navy and a 30-year life, you have to recapitalize at ten per year and so eight is not going to do it,” Deputy Assistant Secretary of the Navy for Budget Rear Adm. John Gumbleton told reporters, according to a Pentagon transcript.

Alongside these comments, Gumbleton did clearly emphasize his support for the budget, suggesting that determinations about shipbuilding consider a mix of readiness, modernization, maintenance, and, of course, budget constraints. Furthermore, Gumbleton did say the service’s plan to build eight ships is the same as last year.

“We're consistent with last year's request of eight ships. We're requesting eight this year again. And we have to manage. Again, it's all about not having a hollow force, making sure we're ready today, modernizing for tomorrow, and then investing for the future. And with this top-line allocated, this is the right blend to do that,” Gumbleton.

Of course, the fundamental assumption here would be that, in an optimal scenario, both could be pursued, meaning the Navy’s future fleet could both be extremely large and high-tech.  The principal impediment to this, from those advocating a smaller Navy, is budget constraints and a need to balance readiness, technological innovation, and other key service priorities such as the Columbia-class submarine.

Either way, the Navy does appear to be backing off its previous plan to pursue a 500-ship Navy, including a large mix of manned and unmanned platforms. Just prior to the change in administration, Joint Chiefs of Staff Gen. Mark Milley told Seapower Magazine that a 500-ship Navy was still an “aim point.”  Is that still true? Very little has been said about force construction plans recently in terms of a numerical mixture.

The question pertains to a longstanding debate surrounding the value or efficacy of fleet size. Some Navy and Civilian weapons developers are of the view that a smaller numerical force, equipped with long-range weapons and sensors, cross-domain networking, and a new generation of manned-unmanned command and control can be just as successful as a larger fleet. This may be particularly true when it comes to the Navy’s Distributed Maritime Operations concept, which calls for a more dispersed, yet highly networked force driven to a large extent by drone-human connectivity.

Conversely, advocates for a larger Navy ground their thinking in several key principles, given that the U.S. Navy now operates in a great power era facing very large, technologically sophisticated adversaries such as China. In any kind of major engagement, the thinking goes, numbers will matter substantially. Also, the amount of available ships continues to fall well short of global demands and requests coming from regional Combatant Commanders. Given the global scope, reach and multi-faceted mission objectives of the Navy, a large presence is required. For instance, the Navy mission specifically requires that the service help secure and safeguard vital shipping waterways throughout the world, given that 90 percent of global commerce takes place on the ocean.

Then there is deterrence, perhaps of greatest significance, as the Navy routinely emphasizes the importance of presence, training, and allied interoperability exercises to inform potential aggressors that a U.S.-led coalition of nations is consistently ready to respond should a crisis emerge. In many cases, the mere presence of a Carrier Strike Group in a given high-tension area can, quite simply, keep things peaceful and deter potential bad actors from launching attacks or hostile operations. There is little question numbers are key to accomplish this. There is also the question of readiness, meaning the Navy could quite realistically be called upon to confront several hostile actors at one time, a scenario which would require two simultaneous major engagements.

A key circumstance informing all of this simply relates to the sheer size and pace of expansion with the Chinese Navy, a force that is already larger than the U.S. Navy and on track to fast-track continued growth. Not only are the Chinese growing their Navy in terms of size, but they are also infusing the fleet with massive amounts of new technology. Chinese expansion includes rapid construction of aircraft carriers, amphibs, destroyers, and submarines, among other platforms.

Given this, there is a clear consensus on the part of advocates for a larger fleet that both technological sophistication, dispersed operations, multi-domain networking, and manned-unmanned teaming—as well as 500 ships—are critically needed to ensure future stability.