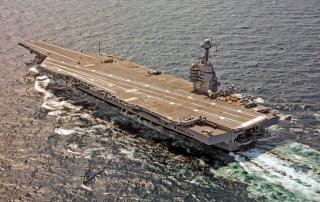 After much deliberation, debate and careful planning, the Navy’s first-in-class USS Gerald R. Ford is finally headed out to sea for the ultimate test of its combat capability: shock trials. Just how well will it hold up against heavy precision weaponry attacking it from long ranges or survive the disruptions caused by bombs, torpedoes, incoming gunfire, anti-ship missiles or other types of potential enemy attacks?

Answering this question is the fundamental purpose of Shock Trials, as they are specifically intended to test the threshold of survivability for the USS Ford, a new high-tech class of carrier likely to clear a path into a new better, networked, more heavily armed advanced maritime warfare against major near-peer rivals. This process is perhaps of even much greater relevance for the Ford-class, as its arrival arguably helps begin a new era in maritime warfare placing carriers more fully into the role of a warship. While carriers of course regularly travel in Carrier Strike Groups, in part to be protected from incoming enemy attacks by destroyers and cruisers, the big-deck power-projection platforms are increasingly being themselves armed for heavy combat. Perhaps most of all, carriers are being armed with a new generation of layered ship defenses to better defend against long-range, precision-guided “carrier killer” anti-ship missiles. While much of the specifics about these kinds of defenses are not likely to be available for security reasons, there are several key areas of focus one might consider in the area of ship defense. Carriers may increasingly need to operate at longer ranges in more dispersed formations, and therefore be more autonomous. This can bring advantages, yet it also may require new kinds of ship defenses.

Much of this likely centers upon networking, meaning if a carrier commander has advanced awareness of an approaching threat such as an incoming anti-ship missile or aircraft in position to drop a bomb, they might be better equipped to thwart, disrupt or stop the attack.  As part of this overall equation, carriers in the future could be armed with advanced electronic warfare to find and jam the electronic “track” of an approaching weapon, or fire interceptor lasers at the speed of light to incinerate an approaching anti-ship missile before it gets close enough to cause damage. The Navy has also, over the years, experimented with various kinds of carrier-operated torpedo defenses. As part of this, carriers are also being built with new drone mini-headquarters on the deck of the ship to coordinate unmanned systems command and control. With an ability to launch and recover large volumes of drones able to surveil, refuel or even attack at longer ranges, well-networked carriers might be positioned to find and destroy enemy attacks themselves, without necessarily needing as many surrounding ships.

Interestingly, a 2007 Department of Defense-directed study on shock trials by the MITRE corporation explains that much of the risk to surface ships comes not only from the prospect of direct impact but from what the study calls “non-contact explosions where a high-pressure wave is launched toward the ship.”

The MITRE analysis, called “Navy Ship Underwater Shock Prediction and Testing Capability Study,” further specifies that, following a nearby explosion, the bulkhead of a ship can oscillate, causing the ship to move upward.