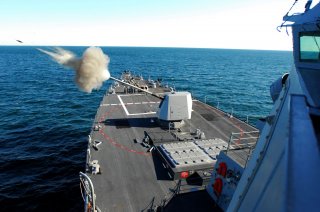 The Navy currently operates more than 80 destroyers and is currently adding more than 10 new, upgraded Flight III DDG 51s with new radar and weapons. However, the service is also deeply invested in sustaining its existing fleet as well, some of which are now decades old.

As part of these kinds of initiatives, the Navy is now replacing steel structures, revamping on-board electronics and performing maintenance on the underwater hull of several existing destroyers that have been maintaining a high mission uptempo.

The 23-yr old USS Carney and 18-yr old Winston S. Churchill will now be dry-docked for periods of time in order to enable the Navy and BAE Systems to do the work. The USS Carney just returned from a six-year operational period in Rota, Spain.

The restoration of each ship shall take more than a year and finish up in 2021 and 2022 respectively.

This work is crucial to the Navy’s vigorous effort to sustain and expand its fleet of warships, given that the U.S. Navy is now smaller than China’s.

While technological sophistication regarding ship weapons, sensors and computer processing may likely provide the margin of superiority in war, sheer numbers of destroyers are also of great significance.

Within the next 15 years, the navy plans to add as many as 30 DDG 51 Destroyers, including 22 new, high-tech DDG 51 Flight III warships and eight state-of-the-art DDG 51 Flight IIA destroyers.

This is part of the reason why current Navy Flight IIA DDG 51s are being back-fitted with newer, far more sensitive AN/SPY-6 radar systems which bring the ability to detect serious threats at much longer ranges. The new Raytheon-built radar can detect threat objects at twice the distance and half the size when compared to existing radar.

Navy destroyers are also being armed with laser weapons and advanced EW applications along with upgraded ship defenses such as SM-3, SM-6 and Tomahawk missiles.