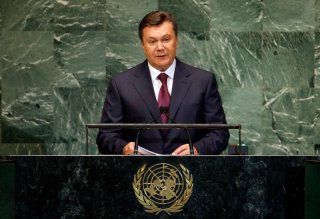 A Ukrainian court announced on Monday that it had charged Viktor Yanukovych, the country’s president from 2010 until early 2014, on charges of treason over an agreement he negotiated with Russia in 2010 that gave the Kremlin access to naval facilities on the Crimean Peninsula.

That agreement, sometimes referred to as the Kharkiv Pact for the Ukrainian city it was negotiated in, allowed Russia to station its Black Sea Fleet in the port of Sevastopol, Crimea’s largest city. Although the agreement was made moot by Russia’s seizure of the Crimean Peninsula in 2014, the prosecutor general’s office argued that the pact was unconstitutional and amounted to treason, as it allowed Russia to station troops in the peninsula and therefore easily occupy it at the outset of hostilities. Prosecutors concluded that the Kharkiv Pact had been “to the detriment of the sovereignty, territorial integrity, and inviolability of the defense, state, and economic security of Ukraine,” adding that its negotiation “provided assistance to a foreign state.”

One of Ukraine’s most prominent political figures of the early twentieth century, Yanukovych—an ethnic Russian from the country’s Russian-speaking east—served as prime minister from 2002 to 2005 and again from 2006 to 2007. In 2004, he ran in, and initially was recorded as winning, the country’s presidential election. However, irregularities in that contest led to massive protests, prompting Ukraine’s Supreme Court to call for the election to be repeated. Yanukovych narrowly lost the rematch to challenger Viktor Yushchenko before winning in a 2010 contest that the international community considered free and fair.

Yanukovych served as president from 2010 until 2014; he sought closer ties to Russia and greater distance between Ukraine and the European Union. In late 2013, after he refused to sign an association agreement with the European Union, hundreds of thousands of protesters swarmed Kyiv’s central square, or Maidan. That protest movement continued until February 2014, when the president fled to neighboring Russia. The fallout from the protest movement and Yanukovych’s abrupt resignation led directly to Russia’s seizure of Crimea and its support for the two separatist movements in the eastern Ukrainian cities of Donetsk and Luhansk.

In addition to the current charges, Yanukovych has already been convicted in absentia and sentenced to thirteen years in prison for his actions during the Maidan protests, including sending a letter to Russian leader Vladimir Putin requesting the deployment of Russian troops to Kyiv to put down the protest movement.

The Black Sea Fleet has participated in Russia’s ongoing invasion of Ukraine. However, its operations were seriously hampered after its flagship, the Moskva, was sunk by a pair of Neptune anti-ship missiles on April 14.