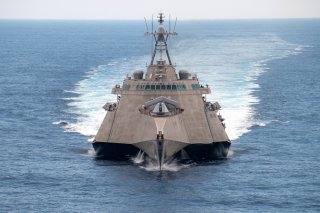 The USS Montgomery, one of the U.S. Navy’s troubled Littoral Combat Ships (LCS) successfully fired sea-based missiles at a target on land in a test that validated the ship’s surface-to-surface mission module. The Navy recorded the testing event, which can be seen here and is worth the watch.

The Navy explained that the target was several nautical miles away from the ship and that three missiles were fired as part of the ship’s LCS surface-to-surface mission module.

“The SSMM is a fundamental cornerstone of LCS lethality and evolving capability to provide enhanced fire support in the littorals and over the horizon in support of the Navy and Marine Corps fighting force,” said Lt. Michael Jones, a warfare tactics instructor from Surface and Mine Warfare Development Center, in the Navy’s statement covering the event. “The new ability for LCS to conduct maritime strikes bolsters the ship's role in conducting shaping operations within amphibious and expeditionary warfare areas,” he added.

The Longbow Hellfire missile was originally introduced into American military service in 1998 as a tank-busting missile. Since then, it has enjoyed wider application throughout the military and has even excelled in a maritime environment.

The Navy’s Longbow Hellfire missile was originally introduced onto both types of littoral combat ships in 2019, proving its ability to “quickly defeat multiple swarming Fast Attack Craft/Fast Inshore Attack Craft.” The missile relies on an all-weather millimeter-wave sensing, semi-active laser guidance that can be effectively used at sea. The Navy added that each Littoral Combat Ship can carry up to twenty-four Hellfire missiles.

Chief Gunner’s Mate David Wynne, USS Montgomery’s weapons chief petty officer, explained that “if you take a proven program of record and adapt its capability for the maritime warfare environment, you have a win for the taxpayer, improved interoperability between various services, and an increased lethality and competitive edge at sea.”

Though a win for the Littoral Combat Ship program, the class still suffers from a number of issues, likely curtailing the ship’s future in the U.S. Navy. The ships have also suffered from several high-profile—and expensive—breakdowns while at sea, necessitating costly repairs.

One of the main issues for the LCS is its astronomical cost per hull. Though the ships were intended to be highly flexible due to a modular design that allows for tailoring to specific mission profiles, the ship’s cost triggered a Congressionally-mandated program stoppage, curtailing the number of LCS hulls the U.S. Navy could purchase. However, despite the Littoral Combat Ship’s myriad problems, the U.S. Navy can now count on the ships to support disembarked ships if the need arises.