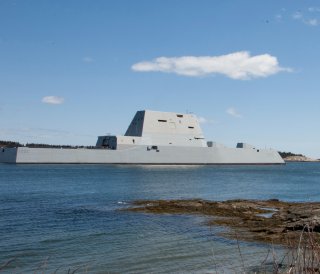 Though several significant design issues have marred the Zumwalt-class, it is far from its home port and finally at sea.

In a statement, the U.S. Navy’s 7th Fleet said, "this is the first time USS Zumwalt has pulled into Guam, and marks the farthest it’s ever been from its home port of Naval Base San Diego since its commissioning.”

Guam is an interesting port of call for the ship, one of the United States Navy’s most essential resupply nodes in the Pacific Ocean—and a good location for a vessel with a reduced radar bounce-back signature, given the island’s strategic nature.

“This port call is a testament to the crew’s hard work and the resiliency of the ship,” said Capt. Amy McInnis, commanding officer of Zumwalt.

“I’m grateful to preside over a crew that conducts themselves with the utmost professionalism and I’m glad we were afforded this time to rest and recharge.”

The guided-missile destroyer incorporates several advanced features not seen in other U.S. Navy ships. It is expressly designed with stealthy, radar-mitigating features intended to keep the vessel out of sight of enemy radar.

“U.S. 7th Fleet is the largest forward-deployed fleet in the world, and with the help of a network of alliances and partners from 35 other maritime-nations, the U.S. Navy has operated in the Indo-Pacific region for more than 70 years, providing credible, ready forces to help preserve peace and prevent conflict.”