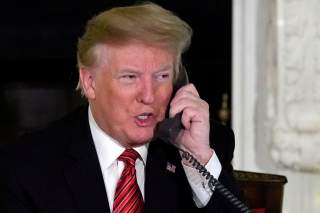 In the week since President Donald Trump and Iranian President Hassan Rouhani addressed the U.N. General Assembly in New York, we have learned several surprising details about what could have been a groundbreaking diplomatic achievement for both men.

We learned, for instance, that French President Emmanuel Macron spent a frantic 48 hours shuttling back-and-forth between the two leaders with a draft document in hand, desperately trying to get both to sign on the dotted line. We learned that Trump agreed to the terms of the French plan, a development that suggests the president is growing despondent of a 15-month long maximum pressure strategy that has failed to achieve any of its policy objectives. And we learned that Trump and Rouhani were close to speaking to one another over a secure line, only for the Iranian president to refuse to pick up the receiver. With every day that passes, last week’s General Assembly session looks more and more like a missed opportunity for Washington and Tehran to at least wrap a tourniquet around the bleeding wound that is the U.S.-Iran relationship.

Delivering remarks to his cabinet on October 2, Rouhani unsurprisingly laid the blame on Donald Trump’s shoulders for the diplomatic impasse. Complaining about mixed messaging from the U.S. side, Rouhani criticized Trump for expressing his readiness to lift U.S. sanctions in private while vowing to increase the economic pressure in public. The Iranian president told his colleagues that Tehran simply couldn’t trust anything that came out of Trump’s mouth. “How can we believe and persuade the Iranians that we would not be deceived by the private message,” Rouhani asked, particularly when the person delivering the mixed message was the same individual who pulled the United States out of an internationally-negotiated nuclear deal?

The Trump administration, of course, has a far different interpretation. It is Tehran, not Washington, that is the sole source of mischief in the Middle East. It is Tehran, not Washington, that has been harassing civilian tankers in the Persian Gulf, lobbing cruise missiles at oil refineries in Saudi Arabia, blowing holes in the sides of vessels large and small, and installing more advanced centrifuges to produce higher-grade uranium. The fact Iran took all these steps after the White House withdrew from the nuclear agreement and attempted to bankrupt the Iranian economy by driving its oil exports to zero either doesn’t register in the Washington policy apparatus or is too inconvenient to acknowledge.

For over a year now, the United States and Iran have been engaged in what could be described as a geopolitical staring-match. Both countries, convinced of their own invisibility and power, believe they can persevere and get the other side to blink. While Trump continues to float interest in talking with the Iranian government about a potential way forward (he apparently reached out to Rouhani through intermediaries during previous U.N. General Assembly meetings), he remains wedded to a maximum pressure strategy that is only pushing the deal he supposedly wants further from his grasp. Instead of forcing the Iranians into new negotiations on U.S. terms, the sanctions have had the counterproductive effect of persuading Tehran to match economic aggression with military aggression. The staring contest has turned into a never-ending disaster, and everybody’s eyes are starting to pop out of their heads.

If you got a U.S. and Iranian negotiator in a room and spoke to them privately, you would likely find both of them sympathetic to the notion that diplomacy is the only way out of the mess. Perpetual economic sanctions on the Iranian economy may severely strain the regime’s finances, bleed Iran’s reserves, and deprive Tehran of valuable market share in the global oil industry. But putting a tighter squeeze on the Iranians will also result in more defiance from a country that prides itself on its rich history and refuses to be coerced and dictated to by outside powers. Iran, in turn, could continue to increase the costs of Washington’s sanctions campaign, but at a considerable cost to itself—including but not limited to the prospect of a military confrontation and even greater diplomatic isolation in the region. Actually sitting down at the table and working through these disagreements peacefully is the best option for both.

The problem, however, has always been what the terms of a deal would be. The United States insists on an all-encompassing arrangement where Tehran agrees to permanently end its uranium enrichment activities, ballistic missile development, and support for regional proxies and partners (among other concessions). Iran, in turn, is only willing to discuss these items (excluding ballistic missiles, which Ayatollah Ali Khamenei has made clear are non-negotiable) if the Trump administration reenters the 2015 nuclear deal and lifts all U.S. sanctions imposed over the last year. Trump may be willing to make this bold leap forward if he has assurances from the Iranians that they will no longer mess around with commerce in the waters of the Persian Gulf and agree to extend the sunset provisions baked into the Joint Comprehensive Plan of Action. But for Khamenei, a man cynical of American motives, such rewards are totally unacceptable while the maximum pressure strategy is ongoing.

There is a deal to be had between Washington and Tehran. Macron’s diplomatic initiative, in which the U.S. permits Iran to again export its oil and Iran agrees to "refrain from any aggression and...seek genuine peace and respect in the region through negotiations,” is a basic framework that provides both sides with a foundation to at least keep the diplomatic momentum going.

Trump and Rouhani were both short-sighted last week in letting the arrangement fall through. Fortunately, diplomacy can still be resuscitated if both leaders allow themselves to meet each other half-way.