Learn from Iran: Could North Korea Use Drones in a Future War? 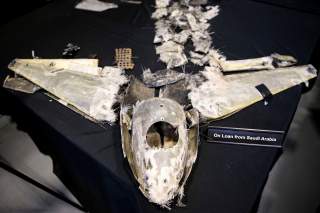 Last week’s surprise drone attack on a Saudi Arabian oil field has kicked up a significant debate on whether this is the future of conflict. The debate over drones has grown dramatically since President Barack Obama began to rely on them heavily in the war on terrorism. Other countries have quickly adapted and developed their own programs.

In the United States, it is often said that the F-35 is the last manned fighter jet America will produce. Drones are cheaper; they can loiter over a battlespace for long hours; and perhaps most importantly, if they are shot-down, there is no human pilot to die or be taken prisoner. Politically this is hugely attractive. It insures that events such as the trial of Francis Gary Powers or the imprisonment of U.S. pilots during the Vietnam War will never recur. The political path of least resistance for airstrikes is now to use unmanned aerial vehicles (UAVs) rather than manned planes.

For smaller powers like North Korea or Iran, drones offer two other benefits. First, because drones are so comparatively inexpensive, they open the possibility of contesting U.S. air dominance. To be sure, such a challenge is still small. But in environments where U.S. air superiority is nearly complete, drones open up new space and possibilities, and this is bound to be attractive.

U.S. air dominance is based on hugely expensive platforms like manned planes, aircraft carriers, large air bases, and so on. Drones suddenly offer a cheap way to conduct reconnaissance and, as the Saudi strikes just demonstrated, to actually attack U.S. allies in what is otherwise a very asymmetric air environment. Given that North Korea’s air force is even further behind than Iran’s due to sanctions and limited fuel for training, the attraction of drones to the North is likely quite high.

Second, drones create ambiguity on whether their use constitutes an act of war. Manned aircraft flying over sovereign airspace is an obvious, widely accepted violation. Many past conflicts have witnessed that, and we have a good sense of what that means. But the rules for the robot airpower of the future do not enjoy such consensus. States can claim, with at least some plausibility, that their drone was in international airspace, that the controller did not realize where the vehicle was, that software problems sent it off course, and so on. In short, drones offer a bit more deniability than traditional manned aircraft. We see much of the same phenomenon with cyber conflict. The norms for cyber are far less clear than traditional conventional exchanges of fire.

Rogue states like Iran and North Korea exploit these twilight spaces because the global consensus is weak that their actions there should be considered worthy of a conventional response. We already see this in the vacillation over how to respond to the drone attack on Saudi Arabia and North Korean hacking.

For North Korea specifically, the Saudi strike may open some new options. Conventionally, North Korea is greatly outgunned in the sky. It also badly lacks aerial reconnaissance capabilities, especially compared to the U2 flights and satellite coverage that the United States (and Japan) conduct over North Korea. The North has already sent UAVs with crude cameras over South Korean airspace since at least 2014. This will almost certainly continue. Drones are cheap enough to be within even North Korea’s constrained resources, and counter-balancing the massive information asymmetry between U.S. and North Korea aerial reconnaissance makes UAVs even more attractive. Nor, conveniently, do the North Koreans care for rules of airspace sovereignty, particularly regarding South Korea. North Korea has provoked South Korea along the demilitarized zone and the northern limit line (NLL) for decades. It will hardly stop now. Seoul is, at last, investing in countermeasures.

The most disturbing possibility though is that North Korea would copy the Iranian strike on Saudi Arabia. UAVs allow the North to expand its traditional land and sea provocations along the DMZ and NLL into the sky. This would enlarge the area of operations for North Korean misbehavior; a whole new list of possible targets would come into range. Traditionally, North Korean provocations occur right on the border, presumably because Pyongyang lacks the ability to strike in depth. That restriction would now be lifted. North Korean drones might now penetrate deeper into South Korea before creating havoc.

This possibility is enhanced by the proximity of South Korea’s largest urban agglomeration to the North. The Seoul-Kyeonggi-Incheon corridor holds some 60 percent of the entire South Korean population. The Blue House—the residence of the South Korean president—is just 23 miles from the DMZ. South Korea’s center of gravity is flush against the border, which would offer many inviting, hard-to-defend targets for Northern drones.

In the strike on Saudi Arabia, Iran has enjoyed some plausible deniability, suggesting it was perhaps the Houthis of Yeman or insurgents in Iraq. Luckily, North Korea would not enjoy such plausibility. Any serious drone strike along the DMZ-NLL would immediately be traced back to Pyongyang. Hence a large-scale strike like last week’s is unlikely here. But UAVs do significantly widen the space for long-established North Korean harassment of the South. And that, in turn, enlarges the possibility that one of these provocations spins out of control and leads to serious conflict.

Robert E. Kelly (@Robert_E_Kelly) is a professor of international relations in the Department of Political Science and Diplomacy at Pusan National University. More of his work may be found at his website, AsianSecurityBlog.wordpress.com.

Image: A U.S. Department of Defense exhibit shows a Qasef-1 drone that was recovered on April 11, 2018 by Saudi Arabia, at a military base in Washington, U.S., November 29, 2018. REUTERS/Al Drago TPX IMAGES OF THE DAY