Turkey and Cyprus Clash Over Ankara’s Deal With Breakaway North 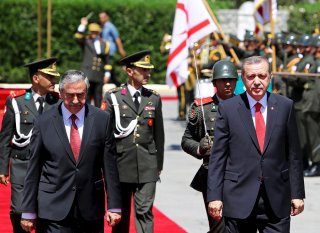 The government of Cyprus indicated on Monday that it would lodge a complaint with the United Nations over Turkey’s new financial assistance agreement with the island’s breakaway northern half—a move that it claimed showed Ankara’s “complete control” over the separatist region.

Nicos Anastasiades, the ethnically Greek president of the island’s southern half, told the country’s state-run CyBC television network that his complaint would mention the status of Northern Cyprus’ Ercan International Airport, the breakaway region’s only major airport. As part of the proposed Turkish-Cypriot agreement, flights from Turkey to Ercan would be considered domestic rather than international flights. Anastasiades suggested that this development proved that Northern Cyprus functioned as a de facto province of Turkey, and warned that Ankara’s actions suggested its eventual intent to annex Northern Cyprus into Turkey.

“I will proceed with the complaint … with the United Nations relative to the airport,” the Cypriot president said, claiming that it was “being integrated and considered a Turkish airport.”

The “protocol clearly demonstrates Ankara’s complete control of the Turkish Cypriots,” he added.

Ersin Tatar, the Turkish Cypriot president of Northern Cyprus, claimed that Anastasiades’ objections to the planned agreement were “propaganda” intended to aid in his re-election campaign the following year. He argued that the airport designation would make transit between Cyprus and the mainland cheaper, claiming that the broader financial agreement would benefit his country’s economy without infringing on its sovereignty.

Cyprus’ divisions originated in 1974, when Turkey invaded the island’s predominantly-Turkish northern half in reaction to a pro-Greek coup in the country’s predominantly Greek south. Although the internationally-recognized government of Cyprus lost control over the island’s northern half from 1974 onward, leaders in the north did not formally declare independence until 1983. To date, Turkey is the only nation that recognizes the independence of Northern Cyprus.

Although the United Nations has attempted to resolve the differences between the island’s two halves and reunite them, UN-led talks intended to establish a federal system in the country have failed over ongoing disputes. While Greek Cypriots in the south have opposed recognition of Northern Cyprus’ independence, they have also blocked attempts to reintroduce the northern half if doing so would grant the north a veto over decisions made in the south. Greek Cypriots have also raised concerns about a united Cyprus’ sovereignty if Turkish troops were allowed to remain on the island indefinitely.