Turkey and the Russia's Deadly S-400: The Air Defense System That Changed Everything 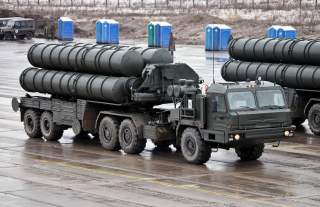 Nowadays, the frenzy of colored maps illustrating projected S-400 kill zones has already caught on with the Turkish press, which has little, if any, knowledge about engagement envelopes and radar coverage in different topographies. Secondly, the S-400 introduces not only new capabilities but an alien strategic culture to the Turkish Armed Forces (TAF), noting that contemporary Russian air defense understanding is rooted in the Soviet legacy of the late 1970s. Thirdly, at some point, the TAF will have to alter its doctrinal order of battle to digest a strategic SAM capacity efficiently. Finally, amidst possible sanctions, which would unavoidably hit the Turkish defense sector’s ties—not only with American entities but also with Europe—Russia may well become an indispensable arms supplier for Turkey.

Technically, the F-35 and the S-400 are mutually exclusive defense acquisitions. Although it was not Ankara’s intent in the beginning, by finalizing the S-400 deal, the Turkish administration has chosen the Russian strategic SAM system over the Joint Strike Fighter (JSF). This sharp decision boils down to prioritizing robust A2/AD capabilities that aims at restraining an adversary’s freedom of movement in a battlefield over the fifth-generation airpower which perfectly fits for gaining information superiority, conducting network-centric warfare, and taking part in coalition warfare endeavors.

The Turkish Air Force has always been a “white-scarf” branch with pronounced offensive counter-air characteristics and pilot-first understanding. The Level-3 partnership to the F-35 project was considered to be the progression of Ankara’s decades-long military aviation paradigm. However, having been cut-off from the JSF program, the TAF’s outlook might profoundly mutate upon the S-400 procurement, especially in the case that U.S. sanctions were to hit Turkey’s F-16 inventory hard. Should the Turkish military face a swift decline in its principal fighter arsenal’s combat readiness, SAM systems may step in as a stopgap. Such a reliance could lead to realizing the optional procurement for a second S-400 system, and even acquiring other Russian weaponry to cover different layers of the national airspace. Sputnik has already hinted at the Pantsir short-to-medium range air defense system as the “logical next step” for Turkey.

One should not underestimate the effectiveness of SAM-centric air defense strategies. Notably, the 1973 Yom Kippur War’s early stages and the Egyptian air defense units’ record revealed the fact that ground-based air defenses could indeed bleed modern air forces. Likewise, lessons-learned from the 2008 Russo-Georgian War are very telling in this respect. Thanks to the upgrades by the Ukrainian defense industry, Georgia’s Cold War-legacy, obsolete SAM systems (i.e., the SA-8 and the SA-11) scored sensational kills, including several attack aircraft and even one Tu-22M3 Backfire from the Russian 52nd Guards Heavy Bomber Aviation Regiment. More importantly, although the Russian forces had quickly-established air superiority at the outset of the conflict, the Georgians still managed to employ their air defenses. One can’t help but ask the question of how the war would have unfolded had Tbilisi operated a modern integrated air and missile defense network supported by electronic warfare capabilities. All in all, SAM systems, be it upgraded versions of the late Cold War weaponry or novel solutions like the S-400, should be taken seriously.

Within the Turkish military’s doctrinal order of battle, air defense is not a separate branch, but a specialization subordinate under the air force. Turkish press sources reported that an air defense colonel would command the arrived S-400 contingent. Once Ankara concludes the full procurement of the first batch, Turkey will establish its S-400 Regiment. It remains to be seen if the regiment command would register a promotion path practice, which, if so, would be very telling.

Nevertheless, there is still conflicting information going around concerning how many launchers and interceptors Turkey will procure, and what kind of sensors configuration will be in place once the deliveries are completed. A typical Russian S-400 regiment is divided up into two divisions (battalions in the Western designation). A battalion has two batteries, each equipped with up to twelve transporter erector launchers (TELAR). An optimum configuration for the export clientele would have four to eight TELARs per battery. The standard S-400 composition is centered on the 30K6E battle management system, the 55K6E mobile command post, the 91N6E Big Bird self-propelled acquisition radar, the 92N6E Grave Stone engagement radar, and launchers. The 30K6E battle management system, in a fully digital setting, can control some other air defense assets including the S-300 variants (the SA-20A and the SA-20B), as well as short-to-medium range systems, such as the SA-15 and the Pantsir family.

Back in April 2019, the Russian News Agency TASS reported that Turkey’s S-400 package would also include the new, very long-range 40N6 missiles, although the specific TELARs for the missile type were not delivered yet. At present, the biggest unknown about Turkey’s S-400s is the SAM site configuration. Up until now, the Turkish officials have repeatedly underlined that the S-400 would operate standalone. While Ankara has deliberately emphasized the standalone characteristics to reassure the NATO strategic community, deploying the S-400 without being supported by other assets could lead to operational shortcomings. In other words, notwithstanding Turkish defense planners rely on the S-400 for protecting the national airspace, the very question of how to protect the S-400 from saturation strikes, anti-radiation missiles, and the cruise missile threat remains unaddressed.

Turkey’s indigenous Hisar line (Hisar A and Hisar O), designed to operate at low and mid altitudes, will have to wait until the mid-2020s before entering into service. This is why the final S-400 configuration could witness some optional components, such as additional sensors and a large number of 9M96 interceptor variants to improve the system’s resilience against saturation attacks (the standard S-400 TELAR can carry up to sixteen of 9M96 missiles variants). The new S-350 Vityaz can also enter Turkey’s shortlist. Besides, there is no reason to rule out the possibility of a follow-on procurement for the Pantsir systems, especially given the fact that the S-400 and the Pantsir could be layered within the same command & control architecture.

Projections suggest that through the S-400 sale, Russia, which dominates more than 40 percent of the air defense exports globally, secures more than 13 percent of the suppliers share in the Turkish weapons market. From now onward, Moscow can capitalize on its newly gained strategic foothold by offering other SAMs, the Su-35 and the Su-57 aircraft, or as I have earlier published for the National Interest, even Su-34 tactical bombers. Any of such deals could offer a lucrative proportion of Turkey’s defense spending to Russia on a silver platter.

Furthermore, back in September 2018, the United States had imposed sanctions on China for buying the S-400 SAM system and the Su-35 aircraft. One of the economic targets was Beijing’s military procurement body, the Equipment Development Department. As announced officially, the S-400 deal was signed between Turkey’s principal defense acquisitions institution, the SSB (the Presidency of Defense Industries) and Russia’s Rosoboronexport. In case U.S. authorities opt for repeating the Chinese precedent, Turkey’s SSB could come under sanctions which would jeopardize not only the Turkish defense sector’s interactions with American entities, but also crucial cooperation projects with Europe. EUROSAM, for example, remains the most critical partner for Turkey in co-producing a long-range/high altitude air and missile defense system, “Siper” (the Ditch). The project involves key actors from Turkey’s military-industrial ecosystem, Aselsan, Tubitak Sage, and Roketsan.  Besides, there is the Turkish fifth-generation air-superiority fighter project (Milli Muharip Uçak – the National Combat Aircraft) in which the British BAE Systems is involved.  If the Turkish defense sector’s cooperation with EUROSAM and the BAE Systems fell through, Russia (and potentially China) could find an open space to exploit. After all, resembling the Soviet arms deals, the incumbent Russian elite see defense exports as a means of expanding political-military influence.

The Geopolitics of Breakup

Finally, let us ask the million-dollar question: Why did Western defense diplomacy fail to change Ankara’s mind about the S-400 acquisition? To fully grasp Turkey’s resentment, one should go beyond day-to-day politics.

I am sure many would be shocked to hear that back in 2007, when the military still enjoyed firm political grip in politics, the Turkish General Staff posted Russian President Vladimir Putin’s sensational Munich Security Conference speech on its official website. In his speech, Putin labeled NATO enlargement as a “serious provocation” and harshly criticized the United States’ “monopolistic dominance” in international affairs, as portrayed by the Russian leader.