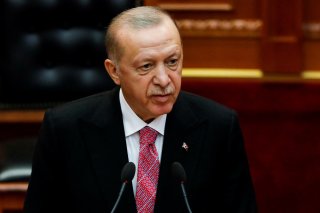 Turkish judges again extended the detention of imprisoned opposition activist Osman Kavala on Monday, ignoring a request by the Council of Europe to release him by early February.

Kavala, who is 64 years old, has been imprisoned since 2017 on a varying set of charges. Kavala played a major role in organizing the major Gezi Park protests in 2013 in his role as the leader of the Open Society Foundation within Turkey. He was initially arrested under Article 309 of the country’s constitution for “attempting to overthrow the constitutional order through violence.” After he was acquitted of that charge in early 2020, he was immediately re-arrested and accused of participating in the country’s failed military coup in July 2016, once again under Article 309.

The court that extended Kavala’s imprisonment scheduled its next hearing for February 21, indicating that it would re-evaluate the circumstances of his detention on February 13. Kavala was initially arrested on October 18, 2017, and has been imprisoned in the high-security Silivri Prison since November 1 of the same year.

Kavala has denied any wrongdoing. His defenders have noted that he has been imprisoned for more than four years in spite of the government’s failure to convict him of any crime. Turkish and international human rights activists have used his case to highlight a rollback in personal freedom under the leadership of president Recep Tayyip Erdogan. Erdogan has defended the judicial independence of the courts and publicly insisted that he does not have a right to question their decisions.

The Kavala case has been a major sticking point in relations between Turkey and the Western world. In October, ten North American and European ambassadors issued a joint statement calling on Erdogan to release Kavala. In response, Erdogan accused them of attempting to interfere in Turkey’s internal affairs and demanded their resignations, although he later backed down.

The European Court of Human Rights (ECHR) has also called for Kavala’s release, arguing in 2019 that no evidence had yet been shown that he committed a crime and suggesting that his detention had primarily been punitive in nature.

The ECHR’s decision led the Council of Europe to inform Ankara in December that it could face “infringement proceedings” over its refusal to release Kavala, potentially resulting in its removal from the Council. Emma Sinclair-Webb, Associate Director of Human Rights Watch’s Europe and Central Asia branch, noted that the Council’s Committee of Ministers had told Turkey to release Kavala before its next session on February 2. Since the court’s next hearing is not until mid-February, infringement proceedings will probably begin on that date.