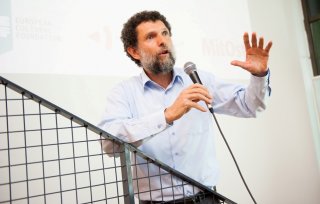 A court in Istanbul has ruled that imprisoned Turkish dissident Osman Kavala should remain in jail, sparking protests and leading to a further deterioration of relations between Turkey and the European Union.

Kavala’s case has attracted attention throughout the West; it received a profile boost when, in October, ten North American and European ambassadors issued a joint statement calling for Kavala’s release—a move which brought the denunciation of President Recep Tayyip Erdogan, who threatened to expel the ambassadors but ultimately backed down.

Kavala, sixty-four, is a former Turkish businessman who served on the board of the Turkish branch of the Open Society Foundations, the pro-democracy organization funded by left-wing donor George Soros. In that role, Kavala was charged with helping to organize the 2013 Gezi Park protests; although he was acquitted of this charge, he was immediately re-arrested and accused of supporting Turkey’s 2016 coup attempt. His case was later combined with the cases of fifty-one others also arrested in the aftermath of the Gezi Park protests; the group has been charged with a range of offenses including espionage and support for terrorism. Kavala has condemned the case against him as farcical and has not taken part in his recent hearings.

Human-rights groups have criticized the charges against Kavala as politically motivated and urged the Turkish government to end his detention. Turkish officials have countered that the country’s judiciary is independent of politics and Erdogan lacks the authority to order him released.

The case has increasingly strained Turkey’s relationship with Europe. The Council of Europe, of which Turkey is a member, has called for Kavala’s release, citing a legal decision by the European Court of Human Rights (EHCR). As a member of the Council of Europe, Turkey is legally required to obey rulings made by the EHCR. However, Ankara has refused to do so in the Kavala case, as well as in the case of Selahattin Demirtas, a Kurdish politician and former presidential candidate arrested after the 2016 coup.

Turkey’s refusal to abide by the EHCR’s decisions has opened the door for the Council of Europe’s Committee of Ministers to initiate infringement proceedings against it. Such proceedings could begin after a two-thirds vote among the Council’s members—making Turkey the second member, after Azerbaijan, to face these proceedings.