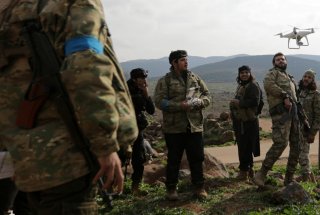 Key point: Ankara’s drones might not be capable of defeating the most capable Russian defenses. But against the lightly-armed Syrians, the UAVs can be deadly.

Turkish medium-altitude drones, which are similar to the U.S. Air Force’s own Reaper drones, struck Syrian forces in and around the city of Idlib, killing 19 people, according to the United Kingdom-based Syrian Observatory for Human Rights.

Turkey on March 1, 2020 also shot down two Syrian warplanes. Ankara claimed that, in weeks of fighting, it has killed 2,200 Syrian troops and destroyed 103 tanks and eight helicopters.

The Syrian government, in turn, claimed it shot down three Turkish drones.

Nineteen years after a U.S. Air Force Predator fired a missile in combat for the first time, more and more countries have armed drones of their own -- and are less and less shy about deploying them in combat.

The March 2020 drone strikes were part of Turkey’s escalating military campaign in Syria. The campaign, which includes air strikes and attacks by ground forces, aims to create a buffer between Syria and Turkey.

“Only sophisticated [electronic-warfare] capabilities that are matched with robust radar-warning and air-defenses can potentially tackle this threat,” drone expert Samuel Bendett told The National Interest. Bendett is a member of the Russia Studies Program at the Center for Naval Analyses' International Affairs Group.

Russian forces, which arrived in Syria back in 2015 in order to bolster the regime of Syrian president Bashar Al Assad, have deployed sophisticated defenses against rebels’ drones, including radars, short-range guns and missiles and radio-jammers that can disrupt drones’ command signals and data-links.

Moscow rushed these defenses to its facilities in Syria in response to pestering attacks by “swarms” of small, commercial style drones that Syrian rebels modified to carry small explosive charges.

In January 2018, a swarm of 13 explosives-laden small drones, apparently controlled by Syrian rebels, attacked two Russian bases in western Syria. Each of the drones carried 10 one-pound bomb under its wings, the Kremlin stated.

"As both Islamic State and Amazon have shown, small drones are an efficient way of carrying a payload to a target," Nick Waters, a former British Army officer and independent military analyst, told The National Interest. "Whether that payload is your new book or several hundred grams of explosive is up to the sender."

The Russian defenses have proved to be effective against small, off-the-shelf drones. It’s unclear that the same defensive systems would work against Turkey’s own drones, which are much larger, faster and more heavily armed than the commercial models are.

“Russians are yet to deal with sophisticated drone attacks in Syria,” Bendett said.

But Ankara isn’t taking any chances. It has steered its drones around areas defended by Russian missiles and guns, Bendett pointed out.

The Turkish military operates around 130 armed drones of several types, including five versions of the Anka plus the Karayel and the Bayraktar TB2. All can carry small, precision-guided missiles.

Turkey developed its drones in part in response to the United States refusing to sell to the Turkish military the American-made Predator or its larger Reaper variant. Turkey like other would-be drone buyers simply copied the Predator’s layout.

Other countries the Americans turned down for drone sales looked to China, instead. Beijing has developed several drones in the same class as the Reaper and Predator.

Egypt, Saudi Arabia, the United Arab Emirates and Iraq all have acquired the Chinese CH-4B armed drone and have deployed them in combat in Libya, Yemen and Iraq. Jordan however was unhappy with the Chinese drones and, in the summer of 2019, offered them for sale.

In developing its own drones instead of buying them from China, Turkey avoided a similar experience. Ankara’s drones might not be capable of defeating the most capable Russian defenses. But against the lightly-armed Syrians, the UAVs can be deadly.

David Axe serves as Defense Editor of the National Interest. He is the author of the graphic novels  War Fix, War Is Boring and Machete Squad. This article first appeared at the beginning of this month.