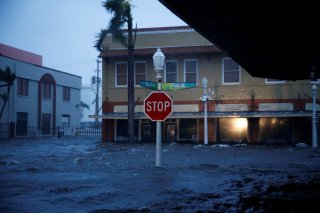 Hurricane Ian made landfall in Florida on Wednesday morning before blowing northeast across the state throughout the day and into the night. The hurricane has left widespread power outages, flooded homes, and at least one fatality in its wake.

When the hurricane made landfall in southwest Florida early on Wednesday morning, it was regarded as a Category 4 storm, one of the strongest such hurricanes to strike Florida since organized records were kept. Since the hurricane made landfall, officials have downgraded it to a Category 1 hurricane, indicating a somewhat lesser wind speed—although the state’s emergency services have continued to urge residents to remain indoors until it has passed. Emergency rescue officials have also warned Florida residents not to walk or drive through floodwaters, and to remain indoors and seek higher ground if water enters rather than try to leave.

The National Oceanic and Atmospheric Administration’s Ocean Service, which has covered Hurricane Ian for more than a week, reported on Wednesday that water levels in several coastal communities had increased by more than six feet immediately before it made landfall—a number greater than that of Hurricane Irma, which led to an immediate increase of 4.25 feet, the state’s previous record. Videos from live cameras in western Florida, where the storm first made landfall, showed water rising in the streets and eventually submerging any cameras left in place.

In the run-up to the hurricane’s landfall, Florida Gov. Ron DeSantis ordered sweeping evacuations of coastal areas likely to be flooded and warned Floridians living further inland that “major, major flooding events” were likely to occur as the hurricane crossed the state.

“This is a big one, and … we all know there’s going to be major, major impacts,” DeSantis said, claiming that it was “going to rank as one of the top five hurricanes to ever hit the Florida peninsula.”

An estimated two million people across Florida were left without power on Wednesday, according to the Miami Herald. Casualty estimates from the disaster have not yet been made; officials in Palm Beach county reported that the body of a thirty-four-year-old man had been found in floodwaters, but the precise cause of death is still under investigation. Hurricane Irma, the last major hurricane to strike the peninsula, killed at least eighty-four people, while Hurricane Michael, an equally strong hurricane that struck the Florida panhandle the following year, killed at least seventy-four across several states and Central American nations.