Two Russian Su-34 Strike Fighters Just Smashed Into Each Other 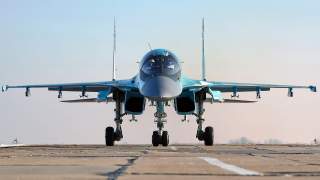 Two Russian Su-34’s suffered a serious collision during a training session in the Lipetsk region of western Russia, interrupting a summer streak of positive headlines for Russia’s staple strike fighter.

The Su-34’s first made kinetic contact after one of the planes grazed the cockpit of the other with its wingtip. The situation took a rapid turn for the worst as the jets scrambled to turn away from one another without proper visual contact, leading to a more intense series of scrapes culminating in damage to the cockpit, fuselage, and engine of one of the planes. Meanwhile, the other Su-34 lost its wingtip and some portion of its onboard electronic countermeasures (ECM) system.

Unlike a similar Su-34 incident over the Far East earlier this year, the planes managed to land safely in the aftermath of the collision. Both fighters, however, had sustained catastrophic structural damage and will require extensive, costly repair work to reenter service in the Russian air force.

A recently published photo depicts the destroyed right wing of what appears to be the lead plane in the exercise; the Su-34 that was first hit by the lead plane’s wingtip is reportedly in even worse shape.

The full circumstances of the accident are pending the result of an ongoing investigation, but a local Lipetsk source confirmed to TASS news agency that the collision stems from operator error by at least one of the pilots: "the pilots’ error resulted in the collision over the Lipetsk Region, a special commission is now studying the details of the accident, which will particularly determine the extent of responsibility of each of the crews.”

“Crews,” rather than “pilots,” is a key operating distinction. Since the Su-34 is a twin-seat aircraft with a pilot and navigator/weapons operator, the special commission has to weigh the relative responsibility of both Su-34 crews involved with the collision. Whoever the guilty parties turn out to be, TASS’ source predicts that they cannot expect to get off with a mere slap on the wrist: in addition to any demotions and disciplinary punishments, "the pilots are likely to pay for the damages inflicted."

Prominent Russian defense outlet Voennoe Obozrenie found a silver lining to the incident, presenting the fact that both fighters were able to achieve a controlled landing in spite of such heavy structural damage as a testament to the “professionalism” of the pilots and the durability of the Su-34's construction.

The Lipetsk collision puts a damper on what has otherwise been a summer of upbeat Su-34 news. It was revealed earlier last month that the Su-34 is slated to receive its first major modernization package, expanding the fighter’s already-formidable armament suite and providing additional ECM tools including the L700 “Tarantul” electronic warfare (EW) system. Several weeks later at the MAKS 2019 Airshow, the Su-34 was prominently displayed alongside the Su-57 and Su-35 as one of Russia’s three top fighter export options for Turkey.

Ankara's top officials, while playing their cards close to their vest, are on record as at least publicly acknowledging that they are considering the Su-34 as an option; an option that, as previously highlighted by The National Interest, could serve as a stopgap solution for Turkey’s air force needs while Ankara prepares to serially produce its own fifth-generation “TF-X” fighter.