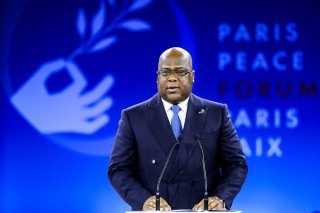 The Ugandan Finance Ministry announced on Monday that it had transferred $65 million to the Democratic Republic of the Congo (DRC)—the first installment of the $325 million reparations package that the International Court of Justice (ICJ) ordered Kampala to pay as compensation for the damage it caused to during its intervention in the Second Congo War from 1998 to 2001.

“It’s true we have paid $65 million as the first installment,” Ugandan Finance Ministry spokesman Apollo Munghinda claimed on Monday. He added that the payment had been made on the first day of September, in accordance with a previously-established timetable. Patrick Muyaya, a spokesman for the Congolese government, later confirmed to Reuters that the first of the five scheduled payments had been made.

In 1999, the new Congolese government brought a legal case against Uganda before the ICJ, arguing that Ugandan soldiers had engaged in looting and other war crimes during their ongoing occupation of eastern Congo. After a six-year legal battle, the ICJ ruled in Congo’s favor, claiming that Uganda had violated international law by supporting anti-government rebel groups and directly occupying Congolese territory in the war. Although Congolese officials requested $11 billion in compensation, the ICJ initially declined to state a number, ordering the two parties to negotiate their own reparations, resulting in further deadlock. In February 2022, seventeen years after the original decision, the ICJ ordered Uganda to pay $325 million in reparations between September 2022 and 2026. The ruling stated that it had allotted $225 million for “loss of life and other damage to persons,” $40 million for property destruction, and $60 million for the environmental destruction caused by the Ugandan state-organized looting of gold, diamonds, timber, and other natural resources from Congo.

Uganda’s military involvement in Congo began in 1996, when a loose coalition of African states invaded the country, which was then known as Zaire, to depose ailing dictator Mobutu Sese Seko. The coalition’s efforts were successful and Mobutu was overthrown the following year, but his successor in office, Laurent Kabila, fell out with Congo’s eastern neighbors, prompting Uganda, Rwanda, and Burundi to invade eastern Congo and support several anti-Kabila rebel movements. In return, Kabila established alliances with other African states, including Angola and Zimbabwe, leading to several foreign military interventions and a multi-sided civil war. The Second Congo War, sometimes described as the “Great War of Africa,” lasted from 1998 until 2003 and resulted in catastrophic damage to Congo, hundreds of thousands of direct military casualties, and millions of other excess deaths from starvation and disease.

Uganda’s direct involvement in the war ended in 2001. The remaining factions made peace in 2003. Kabila was assassinated in 2001; his son, Joseph Kabila, led the country from 2001 until early 2019.