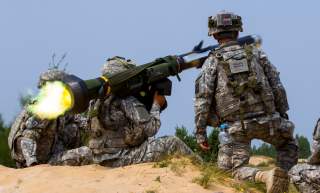 The U.S. State Department has approved the sale to Ukraine of 150 Javelin anti-tank missiles and 10 launchers.

The $40-million deal signals a political retreat for the administration of Pres. Donald Trump. In a July 2019 phone call with Ukrainian president Volodymyr Zelensky, Trump strongly insinuated that the United States would sell the Raytheon-made missiles to Ukraine only if the Ukrainian government agreed to investigate Hunter Biden, the son of former U.S. vice president Joe Biden.

Hunter Biden has been a legal, paid consultant to a Ukrainian energy company.

“This proposed sale will contribute to the foreign policy and national security of the United States by improving the security of Ukraine,” the State Department announced on Oct. 3, 2019. “The Javelin system will help Ukraine build its long-term defense capacity to defend its sovereignty and territorial integrity in order to meet its national defense requirements. Ukraine will have no difficulty absorbing this system into its armed forces.”

“The proposed sale of this equipment and support will not alter the basic military balance in the region,” the department added.

Ukraine bought its first Javelins in March 2018. That deal included 210 missiles and 37 launchers and cost $47 million. The Trump administration in 2017 had approved Ukraine to receive Javelins. The 2017 decision reversed the policy of the administration of Pres. Barack Obama, which placed limits on the sale to Ukraine of what it considered “offensive lethal weaponry.”

The infrared-guided, fire-and-forget Javelins with their 18-pound warheads can destroy armored vehicles and fortifications at a distance of up to three miles. The munitions promised to significantly improve the Ukrainian army’s ability to defend against the Russian-supplied tanks and fighting vehicles in the arsenal of pro-Russian separatists in Ukraine’s Donbass region.

“Javelins alone will not enable Kiev to force Russia out of Crimea and Donbass, but they substantively increase Ukraine’s ability to impose costs on Russian forces,” wrote Ian Brzezinski, a senior fellow at the Atlantic Council’s Scowcroft Center on International Security.

“The Javelins will also likely reanimate among Russian commanders uncomfortable memories of the role that U.S. shoulder-mounted Stinger air-defense missiles played in forcing the Soviet Union’s retreat from Afghanistan in the late 1980s,” Brzezinski added. “In these ways, the Javelins will help to deter further Russian seizures of Ukrainian territory.”

Ukraine’s then-president Petro Poroshenko in mid-2018 celebrated the testing of the first batch of Ukrainian Javelins. “Finally this day has come!” Poroshenko tweeted. “Today, for the first time in Ukraine, the launch of Javelin missile complexes took place. This is a very effective defensive weaponry, which is used in the event of Russian offensive on the positions of Ukrainian troops.”

A year later Ukraine needed more Javelins. On July 25, 2019, Trump and Zelensky spoke via phone on a variety of subjects. “We are ready to continue to cooperate for the next steps,” Zelensky said, according to an edited transcript of the call that the White House released under pressure from lawmakers. “Specifically we are almost ready to buy more Javelins from the United States for defense purposes,” Zelensky added.

“I would like you to do us a favor though,” Trump replied, “because our country has been through a lot and Ukraine knows a lot about it.” Trump then leaned on Zelensky to investigate the younger Biden and offered Zelensky the assistance of U.S. Attorney General William Barr.

It’s illegal under U.S. law to invite foreign interference in a U.S. election.

Before Trump called Zekensky, his administration had delayed $400 million in U.S. military assistance to Ukraine. Lawmakers from both major political parties had questioned the delay, ultimately leading to the revelation of Trump’s attempt to trade missiles for political favors.

Meanwhile, a whistleblower from inside the U.S. intelligence community stepped forward with allegations of wrongdoing involving Trump’s calls with foreign leaders.

In clearing Ukraine to receive the second batch of Javelins, the State Department effectively prevents Trump from withholding the missiles in the hope that Ukraine will render partisan political favors.